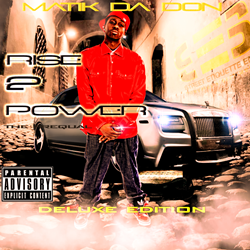 Coast 2 Coast Mixtapes announce the release of the “RISE 2 POWER” Mixtape by Matik Da Don. The 12 track project is currently available for download on the Coast 2 Coast website. This mixtape features major hits by Matik and a few exclusive freestyles.

Having the privilege of being raised in Memphis and Flint, Matik has what some would view as the "best of both worlds" when it comes to his music heritage. Being able to combine both into one voice his lyrical ability is unlike any other we've heard. This mixtape is an exclusive prequel release by Matik and he plans to soon drop the official “THA OMERTA" mixtape coming soon.

He’s always wanted to have a “limitless potential”, and Matik gives listeners a first-hand experience of this in his prequel mixtape “RISE 2 POWER”. Matik blesses the tape with his incredible lyricism and smooth transitions between stories and songs. He displays his best talent track after track and keeps the hype going from start to finish. If you want to hear more from Matik Da Don, keep up with him on Twitter at @matikdadon.