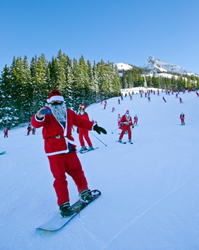 “We are going to have a lot of fun at Mountain High Music Festival, three days of a blast in the number one ski town in North America,” promises BMI Icon Honoree Dean Dillon.

The season for winter events distinctly stamped with Gunnison-Crested Butte, Colorado’s unique brand of joie de vivre kicks off this weekend with the second annual Santa Ski & Crawl. The fun-loving spirit spills over into an action-packed calendar of winter festivals that incorporate talented country singers and songwriters, Nordic skiers who ditch Lycra and embrace costumes, downtown ski jumping, flying snowmobiles and flushing out winter to welcome spring. Participants and observers of all ages are sure to walk away grinning.

It will be a day for red suits and white beards in Crested Butte on Dec. 13 as the town attempts to secure a spot in the Guinness Book of World Records for number of Santas skiing during the second annual Santa Ski & Crawl. It also marks the lowest cost lift ticket for the season, with a rate of $22 for skiers and snowboarders who wear a full Santa suit. Either wear your own Santa costume or buy one through the event for only $20, with child and adult sizes available.

All Santas are invited to ski as a group from the mid-mountain Uley’s Cabin to the ski area base at 3:30 p.m. Those ages 21 and over can begin the Santa Crawl at Uley’s, continue at the slopeside Butte 66 and finish at several locations in downtown Crested Butte. The pre-registration cost for the Santa Pub Crawl is $25 (including a Santa suit and drink tickets) and goes up to $30 the day of the event. Families can finish the day on a nice versus naughty note by attending Light Up Night in Mt. Crested Butte at 5:30 p.m. or the evening before in downtown Crested Butte.

Dean Dillon is equally comfortable kicking back at his ranch in Gunnison, living in Nashville and performing on stages throughout the nation. The Broadcast Music International (BMI ) Icon honoree, Nashville Songwriters Hall of Fame inductee and prolific singer/songwriter is throwing his passion for the Gunnison-Crested Butte Valley and his extensive network of friends in the country music industry behind his latest creative endeavor, Mountain High Music Festival on Jan. 14 – 18. “We are going to have a lot of fun, three days of a blast in the number one ski town in North America,” Dillon promises.

The new event will build on three years of a lower-key Crested Butte Songwriters Festival and is dedicated to presenting a diverse lineup of the world's best recording artists and songwriters, providing an eclectic mix of evening performances in intimate venues in Crested Butte and Mt. Crested Butte as well as at the ski area base in the afternoons. Hosted by Great American Country and SiriusXM’s on-air personality Storme Warren, the dynamic line-up includes headline concerts by Texas mainstay Robert Earl Keen and Curb Records artist Lee Brice, who recently released the album “I Don’t Dance” and received 2014 Song of the Year from the Academy of Country Music (ACM). Also look for Grammy award-winning songwriter Rodney Clawson known for such hits as “Drink On It” and “Crash My Party,” ACM award-winning duo Thompson Square, “American Idol’s” Brooke Eden, Nicolle Galyon from NBC’s “The Voice,” and Sonia Leigh, writer of the Zac Brown Band hit “Sweet Annie. ” Also on the roster are the vocal group Due West, R&B recording artist Colin Lake, and bluegrass music sensations The Crowlin Ferlins from Aspen. Dillon and other local artists such as Chris Coady, Evelyn Roper, Lizzy Plotkin, Craig McLaughlin and Bill Dowell round out the roster.

Snowmobiling events and ski areas aren’t often mentioned in the same sentence but in keeping with Crested Butte’s reputation for thinking and acting outside of the box, Crested Butte Mountain Resort (CBMR) has made it a reality. The third annual Roost the Butte on Jan. 10 - 11 consists of four competition categories: snowcross, hillcross, snowovals and hill drag. Watch from the terrain park or bottom of Gold Link lift as snowmobilers fly around the course for their chance to win. Depending on snowfall, Saturday’s events may take place in the nearby North Village meadow.

There's still fun to be had after the lifts stop spinning for the season with the second annual Ultimate Snowmobile Event on April 10 - 12. Hillcross, hillclimb, hilldrags, snow ovals, snocross and “speed n style” categories will decide the Ultimate Snowmobiler. Watching is as fun as competing, and a Jumbotron located in the ski area base will air the various events live and a live feed posted on CBMR’s website.

The premier Nordic events at both ends of the valley have both competitive and laid-back sides. While racing suits are certainly acceptable, it’s the crazy costumes that bring in the crowds and make Gunnison’s Kenny Mac Ski Fest and Crested Butte’s Alley Loop Nordic Marathon truly unique.

Kenny Mac Ski Fest is an event for Nordic lovers of all ages and abilities. Competitive 3- and 5-kilometer races for kids kick off the morning and 15-and 30-kilometer adult races traditionally follow, serving as great training for Crested Butte's Alley Loop the following weekend. A new twist for Kenny Mac is being planned, so watch Gunnison Nordic’s website for updates and a location announcement based on snow conditions. The event is typically held at Hartman Rocks Recreation Area in Gunnison or in the Mill Creek area nearby.

The 29th Annual Alley Loop Nordic Marathon on Feb. 7 is part serious and part silly. Sure there are plenty of high-tech racing suits since Alley Loop is an American Birkebeiner qualifier and part of the American Ski Marathon Series, but there are just as many costumes and light-hearted moments since kids and families are encouraged to participate. Course lengths range from 1.5 to 42 kilometers, and crowds line the streets and alleys to cheer on the more than 500 racers and pack the beer garden on Brick Oven’s deck. The third annual Alley Loop Pub-Ski Crawl and Crested Butte Fat Bike Race take place the day before on Feb. 6.

A ski jump in the middle of downtown? It happens in Crested Butte during Big Air on Elk on March 7 when a snowmobile pulls top skiers and snowboarders who launch off a step-up style jump with a 45-foot gap located at Third Street and Elk Avenue. The invite-only format ensures that each jump will have a good chance of wowing the crowd from approximately 7 – 9 p.m. For more details, call event organizer Colorado FreeSkier at (970) 343-9196 or Two Plank Productions at (970) 349-0350.

Crested Butte Mountain Resort’s annual Slush Huck on April 4 is all about watching monumental water crashes and impressive pond skims as contestants of all ages battle for the title on skis, snowboards and sometimes other unique contraptions while observers line the ski area base and cheer from the Butte 66 balcony.

In typical Crested Butte Style, ski season ends on a humorous note. Locals and visitors alike will be flushing out winter and welcoming spring during the 47th Annual Flauschink on April 1 - 5. The typical Flauschink schedule typically includes a historical slide show at a local nightspot on Wednesday evening, coronation ball and polka dance on Friday evening, parade on Saturday morning, and ski slope salute on Sunday (closing day). The king and queen of Flauschink are presented scepters made from toilet plungers and locally crafted crowns. The “Has Beens” (previous Flauschink royalty) join in festivities, and there is a Flauschink exhibit always on display at Crested Butte Mountain Heritage Museum. For information, contact Michelle English, event organizer, at (970) 349-7348.

For travel planning and general information and to save on flights, hotel rooms, vacation packages, car rentals and more, go to http://www.VisitGCB.com and call (800) 814-8893.