Ramy Tadros, author of "Create, Narrate, Punctuate: How to Fashion Exquisitely Styled Sentences", announces his mission to spark a language revolution and enhance our writing culture. 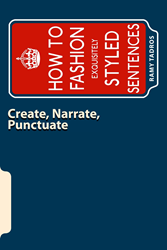 Only then can we free our sentential potential, fashioning either simple sentences or sumptuously seductive creations.

Ramy Tadros, author of "Create, Narrate, Punctuate: How to Fashion Exquisitely Styled Sentences", announces his mission to spark a language revolution and enhance our writing culture.

Shaking his head from side to side, he voices an objection: "No, don't blame it on technology. That's like saying the car ran over the pigeon, killing it, when it is the driver who is at fault. Our linguistic decline has more to do with our contemporary educational culture – our school system, its curriculum, and the people's attitude towards learning – rather than computers and smartphones." He then grabs his espresso and downs the rich syrupy elixir in one shot.

The café is buzzing with activity. Lunchtime in Sydney's central business district resembles a busy beehive, with countless office drones darting around the place. Although many workers have come for a quick meal, a pensive middle-aged man has nestled in a cloistered corner table, to sip coffee while tapping away at his laptop.

His name is Ramy Tadros – writer, editor, adult teacher, and author of "Create, Narrate, Punctuate: How to Fashion Exquisitely Styled Sentences". And he has already announced his mission: to spark a language revolution and enhance our writing culture.

"Our language troubles started to emerge in the 1970s," he says, sliding his laptop aside to focus on the interview, "when grammar and punctuation became evil words associated with rules, authoritarianism, and explicit teaching methods. During this decade, education experts instead recommended implicit teaching methods, emphasizing freedom, creativity, and child-centered learning. This friendlier progressive approach might have had a few advantages. But because it was often taken to its radical extreme, by eliminating all explicit teacher-directed instruction, it led to our present predicament: a generation unable to craft correct sentences and complex constructions. Yet where's the creativity in this? Where's the freedom in being linguistically impoverished and incapable of fully expressing oneself?"

Indicating his laptop, Tadros then clicks on an article from "The Australian" (29 November 2014): "Writing's on the wall: kids failing basic literacy". In it Justine Ferrari writes that results from the Australian national literacy tests show that, by year nine, only twenty-five percent of pupils are "using mostly correct punctuation", only twenty percent are "using effective and accurate paragraphs", and only thirteen percent are "using correct and varied sentences". Yet these disturbing figures mask the true extent of decay because "syntax and tense [are] not even included in the marking criteria".

Ludwig Wittgenstein (1889–1951), one of the most influential twentieth-century philosophers, wrote, "The limits of my language mean the limits of my world." And expressing a similar sentiment, though more than two millennia before Wittgenstein was even born, the Greek dramatist Aristophanes (c. 450–385 BC) said, "High thoughts must have high language."

As he highlights these quotations, Tadros says, "I want to help people expand the limits of their world and have high thoughts. And language – especially, the written word – allows people to achieve both goals. That's why I wrote 'Create, Narrate, Punctuate: How to Fashion Exquisitely Styled Sentences' – to spark a real revolution, a writing revolution for every person who reads the book."