The highly-anticipated follow up to television director Eric Dean Seaton's first graphic novel "Legend of the Mantamaji" Book One launches Wednesday, December 10th delving into action, mystery and the Four Horsemen of the Apocalypse. 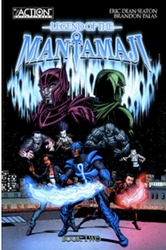 Legend of the Mantamaji: Book Two brings back the action, suspense and fun readers loved in the first book. Available in both print and digital formats for all superhero and graphic novel fans.

Comic book fans...collectively yearn to see more comic books which offer diverse casts, leads of color, less exploitative artwork and a sense of such adventures offering something more..."Legend of the Mantamaji" answers this call in every way.

It isn't easy to release two graphic novels in one year, but television director Eric Dean Seaton is doing just that. Seaton's second book in the well-received Legend of the Mantamaji series, "LEGEND OF THE MANTAMAJI: BOOK TWO" is available in both digital and print formats at several retailers including Amazon.com, Barnes and Noble, Comixology, iTunes, local comic book stores and online at the Legend of the Mantamaji store December 10, 2014.

The second installment finds the would-be hero Elijah Alexander simmering with rage and hellbent on revenge. His high-flying career hangs in the balance as he has copes with the revelation that his his entire existence is a lie. And if that's not enough, he is now being hunted by an ancient evil whose henchmen are truly the Four Horsemen of the Apocalypse. He has a limited amount of time to learn how to control his recently revealed super powers to defeat a being that has killed every Mantamaji warrior before him. Maintaining Seaton's vision of a superhero story that can be enjoyed by the whole family, the second volume has fast-paced action, a smart storyline, jaw-dropping plot twists and clean language appropriate for superhero fans ages 9 - 99.

In a recent interview with BlackMenDossier.com, Seaton discussed the motivation behind Legend of the Mantamaji and why it was important to cast an African-American superhero as the lead:

"I love storytelling... As much as I loved comic books, I never saw anyone that looked like me. I'm not saying there wasn't [anyone], but they weren't major. Nothing stood out. They weren't the coolest ones on the block. So that's one thing that always resonated with me my whole life," Seaton said. "[The series is] multicultural, and I wanted the hero to be African-American, but it's not about him being an African-American. He's not saving people in the hood from drugs. I wanted him to save the world and I wanted to create a world."

LEGEND OF THE MANTAMAJI, a 2014 San Diego Comic-Con Exclusive, is perfect for comic book and graphic novel enthusiasts ages 9 and up.

The book features artwork by Brandon Palas, colorist Andrew Dalhouse, who has worked with Boom, Dark Horse, Image, Marvel and DC and lettering by Deron Bennett, who was nominated for an Eisner Award for his work on titles like Jim Hensons Dark Crystal, Jim Hensons Tale of Sand and Helldorado, among others.

PRAISE FOR LEGEND OF THE MANTAMAJI: BOOK TWO
"Comic book fans across social media have seemed to collectively yearn to see more comic books which offer diverse casts, leads of color, less exploitative artwork and a sense of such adventures offering something more than the next crossover advertisement. "Legend of the Mantamaji" answers this call in every way. Straddling both the "mythical action" and "superhero" genres, this series offers fascinating characters, a deep plot and a lot of well paced and designed action for a fan's limited dollars." -- Alex Widen, Examiner.com

"I've collected and/or read upwards of 5000 comics/graphic novels over the years, and The Legend of Mantamaji series does not have the feel of an independent...it holds it's own with the Big Boys in quality, and TOPS them in originality! Thank you for creating an ORIGINAL African-American superhero, not just a reboot or retcon of other well-known, established characters. The story is riveting, and the twists are beguiling... but I'd like to see more of the Sanctuants. Hopefully that wish is granted in Book 3! I can't wait!! --Derrick Sessoms, Amazon.com user

ABOUT ERIC DEAN SEATON:
As an episodic director, ERIC DEAN SEATON has helmed 38 different shows, 195 television episodes, 18 music videos and two pilots for Nickelodeon, as well as two pilots for Disney XD. He has also directed episodes of the NBC/Warner Bros. comedy Undateable, BETs Lets Stay Together and Reed Between the Lines. He is a Cleveland, Ohio native and attended The Ohio State University. Eric, his wife, son and daughter live in California. LEGEND OF THE MANTAMAJI is his first graphic novel series.