"La Belle Femme," an Irish Short Story by Aine Greaney, Will Be Published as an eBook on December 21st, "Celebrate Short Fiction" Day

Aine Greaney's award-winning short stories have the lilt and fine character delineation that you'd expect from a traditional Irish storyteller. 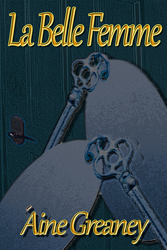 In just a few, finely crafted phrases, Aine Greaney transports me to contemporary Ireland, where I quickly learn to care deeply about her complex, thoroughly Irish characters,

Told from opposite points of view, "La Belle Femme" follows Moira and Alan, both middle-aged, and both married to other people, who have used their every-other-month business trips to conduct a long-term illicit affair. During one rainy summer, Moira's marriage implodes, while Alan and his wife suffer empty-nest syndrome. Unknown to the other, each decides to finally end their years' long tryst. But after all these years,neither has a clue how to end it truthfully.

"La Belle Femme" will be published as a PHP Shorts eBook on December 21st -- the winter solstice -- as part of Pixel Hall Press's participation in "Celebrate Short Fiction" Day.. It will be available on Amazon, Apple iBookstore, Barnes & Noble, and Kobo.

An Irish native who now lives and writes on Boston’s North Shore, Aine Greaney's most recent writing recognitions include a Pushcart nomination and selection as a "notable" in Best American Essays 2013. Other writing awards and shortlists include the Hennessy Award for New Irish Writing, the Fish Anthology, the Rubery International Book Award, the Frank O'Connor Award, the Irish News Short Story Award and Indie Lit 2011. Aine is the author of four books (two novels, a short story chapbook collection and a book on writing). Her fifth book "What Brought You Here?" (a memoir) is a work-in-progress. In addition, her personal essays and short stories have been published in consumer and literary publications such as Salon.com, "The Boston Globe Magazine," "Forbes," "The Daily Muse," "Generation Emigration," "The Irish Times," "Writers Digest" and "Books by Women." In addition to writing, she presents and teaches at various conferences, book clubs, arts organizations and schools.

Pixel Hall Press is a relatively new, old-fashioned small publishing house whose focus is on discovering literary gems and great stories that might otherwise be overlooked. Our mission is to publish books that energize the imagination and intrigue the mind, and to be a conduit between readers and provocative, stimulating, talented authors.

In this era of digital technology, Wall Street involvement and merger mania, many mainstream publishers seem to have lost sight of core principles and the purpose of publishing. At the other end of the spectrum is the veritable avalanche of self-published books that are notoriously uneven in quality. Small boutique imprints like Pixel Hall Press are reclaiming the heart and soul of publishing by reviving the idea that a publisher's core purpose is finding and nurturing great writers, and to provide readers with beautiful,

The PHP Shorts imprint of Pixel Hall Press specializes in publishing short stories as individual eBooks, in all popular formats.