Christie®, the industry-preferred brand in the digital cinema projection market, continues to captivate and amaze audiences from the film industry with the world’s most advanced laser projection architecture. 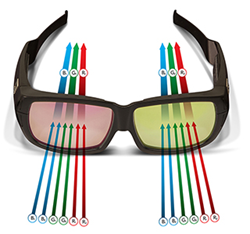 This is a clear testimony that Christie is able to push the capability of high quality visuals to new heights and restore cinematic colors to their intended realism and brilliance.

Christie®, the industry-preferred brand in the digital cinema projection market, continues to captivate and amaze audiences from the film industry with the world’s most advanced laser projection architecture.

Using 6-Primary (6P) color laser modules, Christie DLP® Cinema® dual-head laser projector s are at twice as efficient as today’s best 3D systems. They generate a proprietary mix of photoptically-optimized light wavelengths for each eye directly from the source, in effect eliminating the need for a highly inefficient stage of filtering or polarizing the light as it leaves the projector.

This results in vastly improved 3D light levels, image uniformity, viewing comfort, and an enhanced sense of immersion, especially when combined with advanced color separation glasses technology such as Dolby® 3D, versus conventional 3D systems found in cinemas around the world today. Christie’s 6P laser technology was recently endorsed by Dolby as a foundation technology for Dolby Cinema™, a branded premium cinema offering for exhibitors and movie-goers that delivers the best cinema experience ever.

“Christie laser projectors provide industry-leading brightness of up to 60,000 lumens per projector head, wider color gamut capabilities, higher contrast, and dramatically reduced maintenance requirements, resulting in a better experience for all applications,” commented Lin Yu, vice president, Christie Asia Pacific. “We’re proud to showcase our most advanced cinema technologies to our distinguished guests at CineAsia and this is a clear testimony that Christie is able to push the capability of high quality visuals to new heights and restore cinematic colors to their intended realism and brilliance.”

Exclusive displays of Christie’s breakthrough 6P laser projector will be taking place at CineAsia 2014 using Dolby 3D glasses, which are specifically engineered to match Christie’s 6 primary laser light wavelengths. Also, as a product of our ongoing collaboration with Dolby, the 3D system is able to achieve nearly 45 percent light efficiency, which is almost twice as high as the next best 3D system on the market. The amazing visuals are complemented by the innovative Christie Vive Audio solution that envelopes the audience in dynamic, richly detailed and enhanced audio where speech, special effects, music, and alternative content sound more natural and lifelike.

One of the biggest advantages of Christie’s 6P laser projection system is its scalable and upgradable architecture, which allows users to precisely select the amount of laser light needed for their screen, with the capability to simply add more laser modules in the future if they wish to increase the brightness. Moreover, using the industry-proven Christie Duo system, there is no practical limit to the amount of light that can be put on a cinema screen.

For maximum reliability, Christie’s laser system features integrated cooling in each laser module to provide the right amount of cooling for the lasers that are in use. If the mechanical cooling components in one module experience a failure, then only that module goes dark, but the movie can still play very brightly with the light from other modules. Competitive architectures feature a single cooling unit, which represents a high risk, single-point of failure for the entire system.

Christie is the world’s first cinema projector manufacturer to receive the US FDA approval of variance, allowing the sale of laser projectors for use in commercial cinemas. So far, its groundbreaking laser projection system has already been installed in premium format theaters at various parts of the world. This includes the world’s first commercial pure laser projection system, fitted at the prestigious Shanghai Film Art Center in June 2014 and in November 2014 at the Moody Gardens MG3D Theater and Seattle Cinerama.

Christie Digital Systems USA, Inc. is a global visual technologies company and is a wholly-owned subsidiary of Ushio, Inc., Japan. Consistently setting the standards by being the first to market some of the world’s most advanced projectors and complete system displays, Christie is recognized as one of the most innovative visual technology companies in the world. From retail displays to Hollywood, mission critical command centers to classrooms and training simulators, Christie display solutions and projectors capture the attention of audiences around the world with dynamic and stunning images. Visit http://www.christiedigital.com.