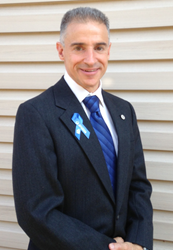 "Implementing this law will educate and inform people of the signs and symptoms of Parkinson's.

The Parkinson’s Disease Public Awareness and Education Act (A-2576) was signed into law by New Jersey State Governor, Chris Christie on December 11, 2014. The law is intended to institutionalize programming to promote public awareness of Parkinson’s disease and highlight the value of early detection, disease management and treatment, including the benefits and risks of those treatments.

Parkinson's disease is a slowly progressive neurological condition that affects over one-million people in the United States. Approximately 60,000 people are newly diagnosed each year. Parkinson’s is characterized by motor problems including slowness of movement, rigidity, and tremor. A number of non-motor symptoms are associated with Parkinson’s, including fatigue, anxiety, depression, and sleep disturbance.

The New Jersey Chapter of the American Parkinson Disease Association had been working on this law for the past nine years. When Chapter President, Allan Bleich assumed the chapter’s leadership role 18 months ago, discussing the law’s merits with policymakers in Trenton became one of his top priorities.

Bleich, a retired police officer of 25 years, who was diagnosed with Parkinson’s disease at age 45, embarked on this personal crusade of phone calls, e-mails and speeches that paved the way for unanimous approvals by both the state Senate and Assembly. Primary sponsors of the legislation were Sen. Joseph F. Vitale (D-Middlesex), and Assemblyman Raj Mukherji (D-Hudson).

"Parkinson's disease affects one out of every 100 Americans over the age of 60, yet as many as half go undiagnosed when they start experiencing symptoms of the disease," said Senator Vitale, (D-Middlesex), Chairman of the Senate Health Committee. "With a concerted effort to provide the public with information regarding diagnosis, treatment and resources, hopefully we can get New Jerseyans the help they need to manage the symptoms of this difficult, debilitating disease."

"An estimated one-million Americans have been diagnosed with Parkinson's," said Mukherji (D-Hudson). "This is a disease that affects too many New Jersey families. The more we know about Parkinson's, the more we can help residents identify symptoms and find the resources they need to help themselves and their loved ones."

This act finally helps the public focus on the cause and nature of the disease. In addition, it helps underscore the lifestyle issues people living with Parkinson’s face, such as, injury prevention and discovering what community-based diagnostic and treatment services for the disease are available.

The New Jersey State Department of Health (DOH) will oversee the campaign by providing public education to doctors, hospitals and local boards of health. In addition, police, fire, and emergency medical personnel along with social service staff will be trained to identify Parkinson's disease symptoms in those they encounter. APDA plans to partner with the DOH as this program is developed, training is delivered and appropriations secured for funding to support the bill.

“The passing of this ground breaking law is the first step. Parkinson's disease is a life-changing illness whose symptoms are not always easily identifiable," said Leslie A. Chambers, President and CEO of APDA. “APDA looks forward to playing an important role in implementing this law that will educate and inform people of the signs and symptoms of Parkinson's. Through this initiative we can encourage early detection and help those with the disease and their families continue to live a life filled with dignity and optimism."

"This long process was truly rewarding and I met some incredible people along the way who were a critical part of bringing this bill to life. As a person living with Parkinson’s, it was humbling to participate in the legislative process that took this bill from an idea to a law," Bleich said. "I had the privilege of testifying before the New Jersey State Senate and State Assembly on behalf of this bill which was an amazing experience and opportunity. It goes to show that anything is possible if you believe in yourself."

About The American Parkinson Disease Association (APDA) APDA was founded in 1961 with the dual mission to Ease the Burden - Find the Cure for Parkinson disease. In that time APDA has raised and awarded more than $86 million to fund research, patient services and education, and to raise public awareness. As the country’s largest grassroots organization, APDA serves the more than 1 million Americans with Parkinson’s and their families through a national network of chapters, Information and Referral Centers, support groups, eight Centers for Advanced Research, and grants to fund the most promising research toward discovering the cause(s) and finding the cure for Parkinson’s. Through its research funding, APDA is able to attract young scientists who are new to the Parkinson’s field, fund promising research that provides a pipeline to the future and fund pilot demonstration projects that are routinely leveraged for further funding.

About Parkinson Disease Public Awareness and Education Act (A-2576)– This law establishes a Parkinson's disease public awareness and education program in the New Jersey Department of Health (DOH). The act calls for the development of Parkinson's disease educational information, which would be made available to the public through local boards of health, physicians, hospitals and clinics. Health care providers also would be assisted in better understanding the disease and research findings through professional education programs. And there will be educational programs for judicial staff, police officers, fire fighters, social services and emergency medical service providers, helping them recognize Parkinson's symptoms and how to best respond to people with the disease.

The measure passed the Senate 38-0. The bill was released by the Assembly Health and Senior Services Committee in May and approved 80-0 by the full Assembly on September 15 and was signed into law by Governor Chris Christie on December 11, 2014.