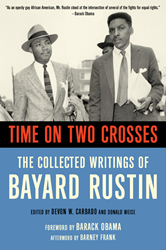 "We honor Bayard Rustin’s memory by taking our place in his march towards true equality, no matter who we are or who we love." —President Barack Obama

We celebrated the 50th anniversary of the March on Washington and the “I Have a Dream” speech by Dr. Martin Luther King, Jr in 2013. One year later, the nation witnesses public protests that highlight the lack of social equality and reveal how tensions of class and race are far from settled. The dream of Dr. Martin Luther King, Jr. and his beloved community continues to unfold. In light of the public response to non-indictments in Ferguson, Staten Island and elsewhere, Cleis Press is rushing to release a new ebook edition this weekend of Time on Two Crosses: The Collected Writings of Bayard Rustin, with the timely message of nonviolent and peaceful protest. Jarred Weisfeld, President of Start Publishing, who bought Cleis Press on November 1st of this year, remarked, “One of the reasons we acquired Cleis Press was because of the remarkable and rich list of books about social justice, equality and human rights. As we read today’s headlines, this has never been more important. Rustin’s strategies of nonviolent protest that he taught to Dr. King will work both for the short term and the long.”

Cleis Press has been developing this project for nearly two years to release a newly revised and expanded edition of Time On Two Crosses in celebration of Rustin’s remarkable work in social justice. With a foreword from Barack Obama, who honored Rustin posthumously with the Medal of Honor, the highest honor a civilian can receive from the United States of America, and an afterword from Barney Frank, the second edition shows new generations the legacy and value of nonviolent direct action.

Activist Rustin was also openly gay at a time when it was easier to live in the closet, further proof of his courage. Cleis Press Publisher Brenda Knight worked directly with former United States Representative Barney Frank on his contribution, who commented, “I knew Bayard Rustin and the Civil Rights Movement of the sixties would not have been possible without him. He guided Dr. King and, unbeknownst to many, talked Dr. King out of some forms of civil disobedience that might have been perceived differently. He was the key actor behind one of our country’s greatest evolutions and has never received full credit. I hope that changes with the publication of this new book.”