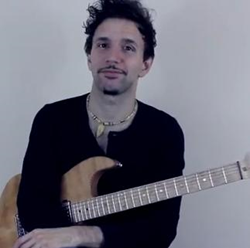 George starts off by performing this funky riff in the key of E at tempo so you can hear how it should sound after some practice. The riff begins with an E7#9 (E seven sharp nine) chord that is often referred to as the Hendrix chord which Marios demonstrates as follows. Open 6th string, 7th fret of the 5th string with 2nd finger, 6th fret of the 4th string with first finger, 7th fret of the 3rd string with 3rd finger, 8th fret of the 2nd string with 4th finger and open first string. The riff is composed of playing the chord and then a bluesy lick based out of the pentatonic scale that incorporates some slides and vibrato. Guitar TAB’s are available for this easy funky riff at GuitarControl.com.

Stevland Hardaway Morris, aka Stevie Wonder, is an American musician, singer-songwriter and producer from Saginaw Michigan. Wonder is considered to be a child prodigy and signed with Motown’s Tamla label at the age of 11. Over the course of his career he has released 26 albums and has won 22 Grammy Awards as well as a Grammy Lifetime Achievement Award.

George Marios
George Marios is a guitarist, composer and recording artist originally from Greece, but relocated to the UK in 2012. George has studied at the Nemesis Guitar School and Leeds College of Music. George was a finalist in the 2009 Guitar Idol contest and has performed and recorded all around the UK. You can find George performing with his band KODY and giving online guitar lessons through his site.