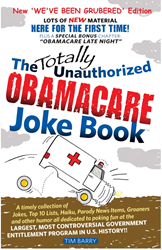 2nd edition update to and edgy and irreverent 96 page collection of over 225 humorous items about Obamacare including one liners, narrative jokes, mock news releases, top 10 lists, parody songs and mo

Things have changed a lot for Obamacare in the 14 months since we launched the first edition of the joke book. Time for an update.

IT Press, today announced the launch of The Totally Unauthorized Obamacare Joke Book -NEW ‘ We’ve Been Grubered Edition’ - the 2nd Edition of its book-length collection of humorous and satirical material about Obamacare. The book’s website (http://www.obamacarejokebook.com) provides sample jokes, background information on the book and complete ordering information. Book is also available on Amazon in both print and Kindle formats.

JUST WHEN OBAMACARE THOUGHT IT WAS GETTING BETTER!!

“Things have changed a lot in the 14 months since we launched the first edition of the joke book,” states humorist Tim Barry, author/editor of the book. “ISIS. Ebola. Sebelius is out. Critical Supreme Court challenges. Democrat control of the Senate vanishing after the 2014 mid-term elections. And millions more Americans are about to learn first hand the joys of Obamacare when employer mandates - delayed for years by executive order - finally start kicking into gear in 2015. The hits just keep on coming! The last straw was when the series of videos featuring Jonathan Gruber's now famous remarks surfaced and pretty much confirmed what lots of people had been saying all along about Obamacare. Lots of material for some new jokes and some updates to earlier ones.”

Edgy and irreverent, The Totally Unauthorized Obamacare Joke Book - NEW ‘ We’ve Been Grubered Edition’(tm) contains 96 pages with over 225 narrative jokes, Top 10 Lists, poems, haiku, puns, mock news releases, song parodies and other humorous items, many of which have been expanded or revised for this 2nd edition including:

Also included is a bonus chapter, “Obamacare Late Night”, featuring some of the best Obamacare quips and one-liners from the masters of the late night talk shows.

“We’ve got a wide variety of humorous material collected here,” adds Barry. “Nobody is going to like them all but everybody should be able to find some items that will at least make them smile a bit.”

In addition to President Obama and members of his administration there are “guest appearances” by the rich and famous - including: Former Presidents George W. Bush and Bill Clinton, Pope Francis, Jeff Bezos, John Boehner, Rush Limbaugh, Bill O’Reilly and, of course, Jonathan Gruber. Plus, references to other recent events and real Washington D.C. locations add a timely feel of the material.

AVAILABLE OVER THE INTERNET

The Totally Unauthorized Obamacare Joke Book -NEW ‘ We’ve Been Grubered Edition’(tm) is priced at $9.95/copy (plus $3.00 S&amp;H). For more information on the book’s content see the book’s website, http://www.obamacarejokebook.com. The book is available in print and direct download PDF formats on the website and also from Amazon in print and Kindle formats.