The first six satellites of the ORBCOMM Generation Two (OG2) constellation, designed and built by Sierra Nevada Corporation’s (SNC) Space Systems, have completed all on-orbit checkout procedures, culminating in the transfer of operations from SNC to ORBCOMM in mid-September. 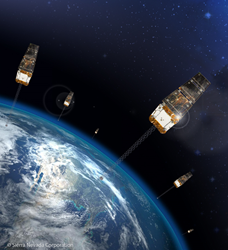 “As expected, we reached our objective of transferring operations to our customer within 60 days of launch…and are very pleased with the OG2 satellites’ performance improvements thus far,” Streit said.

The first six satellites of the ORBCOMM Generation Two (OG2) constellation, designed and built by Sierra Nevada Corporation’s (SNC) Space Systems, have completed all on-orbit checkout procedures, culminating in the transfer of operations from SNC to ORBCOMM in mid-September. The six satellites have already begun providing greater network efficiency for ORBCOMM’s global customers.

The satellites, which augment the first generation ORBCOMM constellation (OG1), were launched into low-Earth orbit July 14, 2014 from Cape Canaveral Air Force Station, Florida. Derived from SNC’s SN-100 bus, the satellites are now processing over 25 percent of ORBCOMM’s Machine-to-Machine (M2M) traffic and will continue to advance network functionality once the remaining 11 satellites in the constellation are launched. SNC is preparing the next 11 satellites for launch in mid-2015.

“We are very proud to hand off orbital operations of the first satellites in the OG2 constellation to ORBCOMM,” said Paul Streit, vice president of programs for SNC’s Space Systems. “As expected, we reached our objective of transferring operations to our customer within 60 days of launch. During the two-month timeframe, we managed the deployment and checkout of six simultaneously-launched satellites, and are very pleased with the OG2 satellites’ performance improvements thus far. Between the six spacecraft, we now have in excess of 24 months, or over 17,000 hours, of orbital operational heritage for the SN-100 bus.”

As the prime contractor and spacecraft bus manufacturer for this upgraded communication constellation, SNC was responsible for the design, development, integration and launch management of the satellites. SNC provided launch support, management and satellite checkout operations from its Louisville Satellite Operation Center (LSOC) in Louisville, Colorado. Both SNC’s LSOC and ORBCOMM’s control center in Sterling, Virginia were seamlessly interconnected, allowing for efficient initial operations and in-orbit testing.

“It is a testament to the strength of our combined ORBCOMM/SNC team to orchestrate a complex checkout of six satellites simultaneously from two geographically dispersed control centers,” said John Stolte, ORBCOMM’s executive vice president of technology and operations. “It’s a great confidence builder for an even more impactful 2015 launch of the remaining 11 spacecraft.”

About Sierra Nevada Corporation
Sierra Nevada Corporation (SNC), headquartered in Sparks, Nevada, is among the “World’s Top 10 Most Innovative Companies in Space.” Over the last 30 years, under the leadership of President Eren Ozmen and CEO Fatih Ozmen, SNC has become one of America’s fastest-growing private companies and the Top Woman-Owned Federal Contractor in the United States. With a workforce of over 3,000 personnel in 17 states, SNC has a reputation for rapid, innovative, and agile technology solutions in electronics, aerospace, avionics, space, propulsion, micro-satellite, aircraft, communications systems and solar energy.

SNC has six unique business areas that are dedicated to providing leading-edge solutions to its dynamic customer base. SNC has a proven track record of success spanning more than five decades. It is focused on providing its customers with the very best in diversified technologies and continues to focus its growth on the commercial sector through internal advancements in dual-use applications and outside acquisitions including the emerging markets of renewable energy, telemedicine, nanotechnology, cyber and net-centric operations.