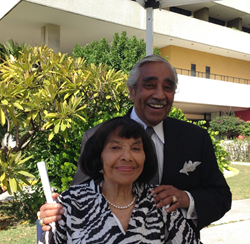 This is the greatest news we’ve had in years relating to Cuba. Even though the US embargo has not been removed altogether, today’s actions go a long way towards improving relations between our two countries.

MEDICC welcomed today’s US-Cuba agreements releasing prisoners in both countries and paving the way for renewal of full diplomatic relations.

“This is, without doubt, the most important news in rapprochement since relations were broken over half a century ago,” said Dr. Pierre LaRamée, MEDICC Executive Director, in Havana. He called the day “historic” and expressed the hope that the new US posture towards Cuba would also “make it possible for cutting-edge Cuban medications and vaccines to become more readily accessible to US patients.”

Dr. LaRamée is in Cuba, having accompanied a people-to-people group organized by MEDICC that was on the island to examine innovations in diabetes prevention and treatment, including use of a Cuban diabetic foot medication, Heberprot-P.

The delegation included several members of Congress—primarily from the Diabetes Caucus—as well as diabetes experts and patient advocates. Among them, Rep. Charles Rangel (D, NY) who said: “This is the greatest news we’ve had in years relating to Cuba. Even though the US embargo has not been removed altogether, today’s actions go a long way towards improving relations between our two countries."

He went on to applaud MEDICC’s role “as a non-political organization that should feel partially responsible, since it has been promoting the kind of good relations it takes to have our government do the right thing.”

Since 1997, MEDICC has worked to enhance cooperation among the US, Cuban and global health communities aimed at better health outcomes and equity. MEDICC produced the feature film ¡Salud! and publishes the MEDLINE-indexed journal MEDICC Review. MEDICC supports research in Cuba by US health professionals, assists US students and graduates of Havana’s Latin American Medical School to return to US underserved communities, and organizes Community Partnerships for Health Equity to improve health care and access in communities such as South Los Angeles and Oakland, California; Albuquerque, New Mexico; The Bronx, New York; and Milwaukee, Wisconsin. See: http://www.medicc.org