The Bronx-Manhattan Association of Realtors® (BMAR) has named Kathy Zamechansky president of the organization. 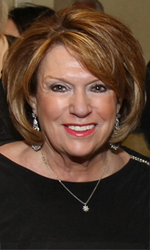 As President of BMAR, I will continue to make our members aware of these and other opportunities so that our members can benefit from the resurgence of the New Bronx.

Ms. Zamechansky is well qualified for the position of president of BMAR, bringing to her new role decades of professional experience in New York City. In her more than 20 years of public service and 15 years as a consultant, she has accumulated integrated, in-depth experience, building relationships in government, business and among grassroots community organizations.

“I'm honored to be selected to represent my colleagues, and I'll be following in the footsteps of some very prestigious people," said Zamechansky. "Among my goals as BMAR president will be to continue to attract developers to the Bronx, seek opportunities in areas that have been re-zoned and continue to build on the successes that have been achieved so far. In the next year I plan on working with the President Elect, Christine Taylor to bring more programs and seminars to our members to help them grow and prosper during these exciting times.”

In her Inaugural Letter to the BMAR’s membership, Zamechansky outlined the issues that she believes are of critical importance for BMAR, including working more closely with organizations like The Bronx Chamber of Commerce and The Bronx Overall Economic Development Corporation. Her goals include sharing more information about programs that affect local shopping strips along Fordham Road, Tremont Avenue and the Grand Concourse. She also stressed that, while the new shopping centers are important for the growth of the Bronx, it’s also important to remember that local shopping areas are the backbone of the Bronx business community.

“This is an exciting time in the Bronx”, stated Zamechansky. “The Mall at Bay Plaza, anchored by Macy's is the first and largest enclosed Shopping Mall to open in 40 years in New York City. As President of BMAR, I will continue to make our members aware of these and other opportunities so that our members can benefit from the resurgence of the New Bronx.”

Zamechansky also cited other current or pending development projects throughout the Bronx, including the new Target that is opening on Lafayette Avenue in the Throggs Neck Shopping Center and The Trump Golf Links in Ferry Point Park that is scheduled to open in 2015. In addition, the State and City plan on opening three new Metro subway stations in the Bronx, including one at the Hutch Metro Center near the new Marriott Residence Hotel. Zamechansky stressed that there are tremendous opportunities for both commercial and residential brokers as the Bronx continues to attract new businesses and people to the Borough.

“Even though the Bronx is doing well economically, the image that the media portrays of the Bronx is outdated and inaccurate, says Zamechansky. “They don’t talk about how strong property values are or the subtle changes that are taking place in the south Bronx, so we would like to try and change that and paint a truer picture of what the Bronx is and what it’s becoming.”

“Kathy brings enormous energy, years of real estate experience and an abiding commitment to the success of this organization and the emergence of The Bronx as a truly desirable place to live in New York City” said Ellen Feld, Member of the Board of Governors of BMAR. “Her no-nonsense style and ability to work with members of the business community, the financial community, the elected officials, and members of this organization and people in general will serve her well in accomplishing real change that will benefit us all.”

The Bronx-Manhattan North Association Of Realtors® (BMAR) is a professional trade association officially representing the real estate industry since 1924 and is the local chapter for the New York State and National Association of Realtors®. BMAR strives to sponsor meaningful programs and services which enhance the member's ability to conduct their business in a competent and ethical manner, to promote cooperation and networking among its members, and to promote the public’s right to use and transfer real estate property. For more information, visit http://www.bmar.org or call 718-892-3000.

KZA Realty Group http://www.kzarealty.com is a commercial real estate brokerage and development consulting firm based in New York City. Founded in 1998 by real estate professional Kathy Zamechansky, KZA specializes in commercial planning, project management, community and government relations, finance, marketing, and communications. Ms. Zamechansky is the President of the Bronx Manhattan North Association of Realtors and a member of several community and business organizations in the Bronx and Harlem, including the Board of Directors of the Bronx Overall Economic Development Corporation, Board of Governors of the Bronx, the Manhattan Board of Realtors, the Board of Directors of the New Bronx Chamber of Commerce, the Harlem Business Alliance and the Advisory Board for the Fund for the Future Women Leaders of the Bronx. In 2009, she was named one of the 25 Most Influential Women by The Bronx Times Reporter and was awarded the Realtor of the Year by the Manhattan North Association of Realtors (BMAR). She may be contacted directly via cell at (347) 386-9452 or email at kzama(at)aol(dot)com.