Coming together for the first time to educate dentists in the state of Arizona are Gergen's Orthodontic Lab and Hershberger Dental Lab teaming up with nationally known speaker Dr. Dar Radfar to offer a one day course on dental sleep medicine. 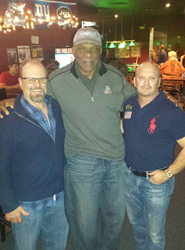 I know we are going to save lives.

Coming together for the first time to educate dentists in the state of Arizona are Gergen's Orthodontic Lab and Hershberger Dental Lab teaming up with nationally known speaker Dr. Dar Radfar of Radfar Seminars to offer a one day course on dental sleep medicine on Saturday February 21, 2015. Topics to be covered at the event include: home sleep testing, taking the right bite, medicare model for treating sleep apnea, working with physicians, medical billing, office protocol, importance of chart notes and how to earn large profits treating sleep apnea. The speaker lineup will include Dr. Kevin Mueller, Dr. Dar Radfar and others and will offer 8 CEs.

David Gergen, CEO of Gergen's Orthodontic Lab who is nationally respected in dental sleep medicine, and Tom Hershberger, Owner of Hershberger Dental Lab who is known by hundreds of dentists across the country, have come together and their recent efforts to grow the dental industry in the field of sleep medicine have become a topic making headlines every where. Mr. Gergen, who many people know as the President of Pro Player Health Alliance, a company that spreads awareness of sleep apnea and holds health evaluations with the Living Heart Foundation sponsored by the NFLPA, says, "It was a no briner to partner with Tom [Hershberger]. He's a great guy, does quality work and is passionate about our mission. By showing dentists from all over the country how to overcome the hurdles in treating obstructive sleep apnea, I know we are going to save lives." Gergen and Hershberger are also putting an emphasis on finding the right bite. After the patient has an appliance and proves to find the correct bite, reconstructive work in the mouth can be done that could potentially offer a solution to obstructive sleep apnea without the patient having to wear the appliance anymore.

Pro Player Health Alliance is leading an effort to grow a nationwide network of dentists willing to learn more about treating obstructive sleep apnea and offer to treat NFL greats for their dental and sleep apnea needs. With countless people who have undiagnosed obstructive sleep apnea, David Gergen, Tom Hershberger, Dr. Dar Radfar and Pro Player Health Alliance are rapidly increasing awareness of the treatable sleeping disorder in the dental community and general population and ultimately changing lives. To register for the seminar for only $495, call Chris Morrison at 623-879-6066. For more educational resources and to register for upcoming events with some of the top speakers in the country, visit http://asbadental.com

Pro Player Health Alliance (PPHA) is an organization dedicated to helping former NFL players, through providing testing and treatment options for those who suffer from sleep apnea. In addition, the PPHA is dedicated to integrating education and raising sleep apnea awareness, in a fun and memorable way. In addition to the campaign, the PPHA is dedicated to testing and getting people treated who suffer from sleep apnea. This has been stepped up by working though The Living Heart Foundation and its HOPE program sponsored by the NFLPA. The PPHA was created David Gergen, President of Gergen’s Orthodontic Laboratories and Former NFL legends.

David Gergen, CDT and President of Pro Player Health Alliance, has been a nationally respected dental lab technician for over 25 years. He received the award for “The Finest Orthodontic Technician in the Country” given by Columbus Dental in 1986. He also has been appointed Executive Director of the American Sleep and Breathing Academy Dental Division, a national interdisciplinary academy dedicated to sleep training and education with over 60,000 members. David rolled out of bed on December 4, 1982 and had his career “ah ha” moment. He knew he was going to be an orthodontic technician and he knew he was going to help people all over the country to help treat their sleep disorders in partnership with their dentists. He has worked for some of the pioneers in the orthodontic and sleep dentistry fields. He was the personal technician for the likes of Dr. Robert Ricketts, Dr. Ronald Roth, Dr. A. Paul Serrano, Dr. Clark Jones, Dr. Harold Gelb, Dr. Joseph R. Cohen, Dr. Rodney Willey, Dr. Allan Bernstein, and Dr. Thien Pham. One of his proudest achievements is receiving The National Leadership award for Arizona Small Businessman of the Year in 2004.