Actress/singer volunteers with the USO and make a moment-filled trip to Oklahoma. 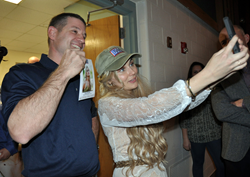 Star of ABC’s hit show “NASHVILLE” Clare Bowen takes a selfie with a service member during a USO meet & greet at Tinker Air Force Base. Photo by Tinker AFB MWR

“I feel so privileged to volunteer with the USO and to have the opportunity to give back, and say thank you to America’s troops and military families," said Bowen.

Star of ABC’s hit show “NASHVILLE” Clare Bowen took time out this holiday to volunteer with the USO and make a moment-filled trip to Tinker Air Force Base to visit and perform her first-ever USO concert for troops and military families Dec. 13. Following in the footsteps of actor/comedian Rob Riggle and baseball legend Randy Johnson, among other celebrities who helped spread much-needed USO cheer to troops this holiday, Bowen extended her thanks to military families
stationed in the Midwest for their sacrifice. ***USO photo link below***

Attributed to Clare Bowen:
“I feel so privileged to volunteer with the USO and to have the opportunity to give back, and say thank you to America’s troops and military families. Being from Australia, I know what it is like to be far away from your family and friends over the holidays. It really is tough and if I can help ease that feeling in some small way, count me in anytime.”