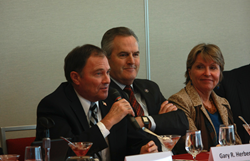 Governor Gary R. Herbert, with GOED Executive Director Val Hale, and Vicki Varela, managing director of tourism, speaks at a roundtable meeting for women in business held at the University of Utah.

“Utah gets a bad rap. It's not because we don’t have women in leadership. We have women, but they are not visible.” She added: “There’s no reason for us to defend ourselves. We need to aggressively promote ourselves," said Sanchaita Datta, CTO FatPipe

Governor Gary R. Herbert met Tuesday with more than 30 of the state’s notable women business professionals at a roundtable meeting held at the University of Utah’s Spencer Fox Eccles Business Building to discuss how to improve the economic environment for Utah women.

“There’s every reason for us to be very optimistic about Utah—optimistic about our future,” said Gov. Herbert, citing the state’s diverse economy and pointing to Forbes magazine’s ranking Utah as number one Best State for Businesses and Careers.

The floor was opened for each attendee to take a turn to speak about a variety of issues and offer suggestions. In light of some recent criticism—some of it unwarranted—the entire group acknowledged that the state has some work to do.

“My call to women in Utah is that we can all do something. We need to come together,” said Susan Madsen, professor of management at Utah Valley University. “I think if we know where we’re at, it’s just going to get better.”

The Utah population has the largest bachelor’s degree gender gap (6%) in the nation. The number of Utah women pursing degrees and certificates in science, technology, engineering and math (STEM) is one of the lowest in the nation as related job opportunities in the state increase.

In the spirit of optimism, many speakers discussed their own positive personal experiences starting businesses or working in leadership capacities in Utah, suggesting that there are a number of incorrect perceptions about what it’s like for women in Utah. They agreed that awareness of existent professional opportunity for Utah women is key.

“As I look around the room, we have so many talented, achieving women,” said Sanchaita Datta, CTO of FatPipe, Inc. “Utah gets a bad rap. It's not because we don’t have women in leadership. We have women, but they are not visible.” She added: “There’s no reason for us to defend ourselves. We need to aggressively promote ourselves.”

The group’s consensus was that the state needs to also improve awareness and messaging to Utah’s women and girls directly, helping both young women and girls—and their parents—understand that women have options. There are a number of programs already in place or under development.

“The STEM Action Center is establishing a statewide mentoring network for young girls and women in the workplace prompted by a national program called Million Women Mentors,” said Tami Goetz, executive director of the STEM Action Center. “Another great project, the STEM Equity Pipeline Project, is a research study conducted by Utah Valley University through a grant from the National Science Foundation. In it, we are studying the root cause for why girls do not pursue STEM-related academic and career pathways. We want to find out where the messaging issue is occurring and how we can fix that.”

Gov. Herbert agreed that parents, teachers and school counselors should all be educated on how to best help girls and young women understand their options and potential, adding that working on career counseling in schools is currently one of his priorities.

“Clearly what we should be doing in the state of Utah is providing opportunities for everybody,” he said. “We are moving in the right direction. We have a few obstacles to overcome, but I am confident that with your help we can continue to excel to where we have more women in business, more women in politics and more women in leadership.”

The Governor’s Office of Economic Development (GOED) charter is based on Governor Gary Herbert’s commitment to economic development statewide. Utah’s economic development vision is that Utah will lead the nation as the best performing economy and be recognized as a premier global business destination. The mandate for this office is to provide rich business resources for the creation, growth and recruitment of companies to Utah and to increase tourism and film production in the state. GOED accomplishes this mission through the administration of programs that are based around targeted industries or “economic clusters” that demonstrate the best potential for development. GOED utilizes state resources and private sector contracts to fulfill its mission. For more information please contact: Michael Sullivan, 801-538-8811 or mgsullivan(at)utah(dot)gov