Shopping sprees awarded as part of Books-A-Million’s Wrap Up Something Wonderful special event. 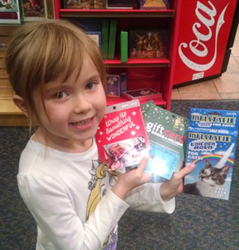 This will definitely go down as the best Christmas on record thanks to Books-A-Million! Ben Schleifer, winner of a $1,000 Books-A-Million shopping spree

Two shoppers received a boost in their spending power this holiday season when each won a $1,000 shopping spree courtesy of Books-A-Million. Ben Schleifer and Sara Bancroft were winners of the $1,000 shopping sprees that were given away as part of Books-A-Million’s Wrap Up Something Wonderful special event. The event took place Saturday, December 13.

“This shopping spree is going to make it a very merry Christmas!” said Schleifer of Concord, N.H. “My daughter had so much fun during the shopping spree. She picked out a ton of cool stuff for herself and also got gifts for her friends and family! This will definitely go down as the best Christmas on record thanks to Books-A-Million!”

“I am overwhelmed and so very grateful to win the $1,000 shopping spree from 2nd & Charles and Books-a-Million,” said Bancroft. “To be the winner of such an amazing giveaway from such an incredible company is very exciting!”

In addition to these shopping spree giveaways, Books-A-Million and its customers have shown their holiday spirit by raising money for The Salvation Army and supported U.S. troops with the Coffee for the Troops campaign.

Books-A-Million, Inc. is one of the nation’s leading book retailers and sells on the Internet at http://www.booksamillion.com. The Company presently operates 262 stores in 34 states and the District of Columbia.

The common stock of Books-A-Million Inc. is traded on the NASDAQ Global Select Market under the symbol BAMM. For more information, visit the Company’s corporate website at http://www.booksamillioninc.com.