“From Aid to Enterprise,” a case study released by BRAC on the 10th anniversary of the Indian Ocean tsunami, suggests a path from grant-based aid to sustainable interventions and for-profit enterprise 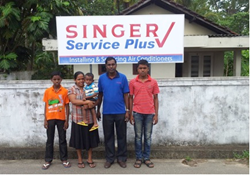 Mangalika with her husband and three sons in front of the family's new repair center.

"Crises of historic magnitude can lead to equally historic gains if women have the tools they need to seize control of their lives and wellbeing." – Susan Davis

Mangalika and her husband, K.G. Sirisena, recall the wall of water that swept over their home in coastal Sri Lanka ten years ago. “Eight feet of water came into the house,” she says. “The only things left were the clothes we were wearing. We were lucky to escape with our lives.”

Dec. 26 marks the 10-year anniversary of the Indian Ocean earthquake and tsunami, one of the deadliest natural disasters in recorded history. An estimated 230,000 people in 14 countries lost their lives in the disaster and immediate aftermath.

To mark the anniversary and highlight the possibilities for renewal in areas hit by wars, epidemics and natural disasters, BRAC, the development organization based in Bangladesh, has released a case study on its experience in Sri Lanka, “From Aid to Enterprise: BRAC’s Evolution from Relief to Sustainable Financial Services in Sri Lanka.”

Mangalika and her husband, featured in the report, were running a home-based business servicing Singer-branded and other electronic appliances, employing 12 part-time employees and making a profit of roughly $750 a month. The tsunami laid waste to their business along with countless others.

Mangalika rebuilt her business with microfinance loans from BRAC, using small loans to purchase spare parts such as motors, compressors and fans and power. “We were determined to re-build what we had, no matter what,” she says. “BRAC’s loans allowed us to do that.”

In “From Aid to Enterprise,” officials at BRAC discuss the challenges of transitioning an initially grant-funded nonprofit development organization into a sustainable microfinance institution, and in this case a for-profit microfinance provider eventually sold to the private sector in 2014.

“At BRAC, our objective is not to create a surplus for investors, or to perpetually use donor funds,” says S.N. Kairy, group CFO of BRAC and BRAC International. “It is to sustainably serve poor people. We prefer to start with subsidy and donor funds, and then gradually move to sustainability. That movement has to be driven by clients and their own ability to borrow greater amounts in their own time.”

“From Aid to Enterprise” suggests a path for other countries in a post-conflict or post-disaster stage.

January marks the five-year anniversary of the earthquake that destroyed large parts of Haiti, for instance. BRAC entered Haiti shortly after the earthquake and now runs a center that provides artificial limbs and orthotic devices for those in need. Modeled on a similar BRAC center in Bangladesh, the BRAC Limb and Brace Center in Haiti is on a path toward full cost recovery.

The experience of BRAC in Sri Lanka also offers hope for recovery from the Ebola epidemic currently devastating parts of West Africa, according to Susan Davis, president and CEO of BRAC USA.

“Despite the situation we find ourselves in today with the rapidly unfolding crisis in West Africa due to the spread of the Ebola virus, it's worth looking at trends from recent decades to understand how philanthropic capital can build models of sustainability,” Davis wrote in The Huffington Post recently. “Crises of historic magnitude can lead to equally historic gains if women have the tools they need to seize control of their lives and wellbeing.”

BRAC operates microfinance, agriculture, girls’ empowerment and education programs in Sierra Leone and Liberia, and is part of the Ebola Survival Fund, a coalition of nongovernmental organizations determined to crush Ebola.

“From Aid to Enterprise” documents the rare trajectory of BRAC’s operations in Sri Lanka, evolving from philanthropically funded relief operations to a commercial financial services company serving the poor.

BRAC’s initial post-tsunami relief interventions in Sri Lanka were geared towards recovery and rehabilitation efforts, including the cleaning and disinfesting of contaminated water wells, constructing latrines to prevent health hazards, and replacing lost and damaged school materials. Beginning in 2006, as the need for immediate disaster relief and rehabilitation efforts subsided, BRAC moved towards providing micro-loans and facilitating economic development at the community level.

BRAC took a phased approach to entering the sustainable microfinance sector. Within a year of operations, it had reached more than 26,000 clients, making it a significant microfinance provider in Sri Lanka. Starting in 2007, selected clients – mostly women heads of households, widows, and those without other assistance – began receiving training on poultry and livestock rearing, agriculture, and enterprise development. Women were trained in basic business planning, assessing the market, locating wholesale options, handling day-to-day bookkeeping, and interacting with customers. A capacity development program also helped strengthen other local organizations.

By 2007, the company had evolved to a fully-fledged microfinance operation, and a near replication of BRAC’s microcredit model in Bangladesh BRAC scaled its operations to a portfolio of over USD 11.2 million, serving 74,000 borrowers at its peak in 2011.

After 2011, BRAC loan portfolio began to contract as a result of capital constraints that resulting partly from Sri Lanka’s lack of regulatory framework. There were ambiguities and restrictions on how microfinance organizations could fund their operations. BRAC’s legal structure effectively prohibited it from borrowing funds on a commercial basis from international sources, and its ability to finance operations through savings deposits was constrained by government directives, resulting on a squeeze on access to capital.

In June 2013, BRAC partnered with Lanka Orix Leasing Group (LOLC), a longstanding provider of leasing and insurance and other financial products in Sri Lanka with its own existing microfinance practice (LOLC Micro Investment Ltd), to acquire a majority stake in a regulated financial services company, the for-profit Nanda Investment and Finance PLC (NIFL). In 2014, in response to new changes to the Sir Lankan central bank’s capitalization requirements, the board of BRAC International sold its 59.33% stake in the jointly held company, BRAC Lanka Finance PLC, to Commercial Leasing and Finance PLC, a subsidiary of its partner, LOLC.

The sale was completed in September 2014, marking BRAC’s exit from Sri Lanka and ending a successful transition from aid to enterprise.

“Sri Lanka is successful because we started with grant funding,” says Kairy. “This is the best way to set up, as it allows you to really reach the poor, and then allows a path for sustainability to emerge. If there is no grant, then in effect, you are serving a higher income portion of the population, perhaps the moderate poor. But to eventually get to a place of sustainability while serving the poorest, an organization needs some level of subsidy at the start.”

BRAC, a development organization founded in Bangladesh in 1972, is a global leader in creating opportunities at scale as a means to end poverty. With more than 100,000 employees, it is the world's largest non-governmental organization, touching the lives of an estimated 135 million people in 11 countries using a wide array of antipoverty tools such as microfinance, education, healthcare, legal rights training and more.

BRAC USA is an independent, US-based affiliate of BRAC formed in 2006 to advance and support BRAC's global mission to create opportunities to unleash human potential and end poverty.