Children’s Hunger Fund Invites Everyone to “Think Inside the Box”

After announcing its year-long initiative to raise 25 million meals in 2015, the hunger-fighting children’s charity invites everyone to join the effort. 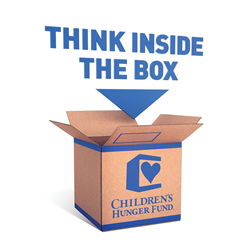 “To raise twenty-five million meals, we are appealing to everyone to understand that just twenty-five cents will provide a meal to a hungry child. It’s an initiative that anyone can join,” says Dave Phillips, President of Children's Hunger Fund.

By announcing its impactful new initiative to raise 25 million meals in the coming year, Children’s Hunger Fund seeks to engage everyone, whether corporation, church, or individual, to join the movement to change the life of a suffering child. Since 1991, Children’s Hunger Fund has operated on 99% efficiency, and because of this, supporters can provide one meal for just 25 cents.

President and founder of Children’s Hunger Fund Dave Phillips commented on the coming year stating, “With the Think Inside the Box initiative, we invite corporations, churches, and individuals to impact the lives of children in crisis everywhere. Corporations and churches have the opportunity to serve their communities and individuals are able to be a part of something bigger than themselves.”

Children’s Hunger Fund collects, packs, and distributes meals in the form of a Food Pak, a 20-pound box of nutrition-rich food, and distributes those boxes to churches and other NGOs in communities in the US and around the world, who hand-deliver the Food Pak into the home of a needy family. The charity emphasizes that it does not seek the spotlight; the people receiving food are always to receive it from others within their own community, who have partnered with Children’s Hunger Fund for that region. Helping to build these types of peer-to-peer relationships in a community allows for the family and children to be helped in ways beyond just providing food, but to potentially meet their spiritual, educational and sustainability needs as well.

“To raise twenty-five million meals, we are appealing to everyone to understand that just twenty-five cents will provide a meal to a hungry child. It’s an initiative that anyone can join,” says Phillips.

More information can be found at ChildrensHungerFund.org/Think.

Think Inside the Box launches on January 1, when Children’s Hunger Fund begins to count meals towards the goal of 25 million.

Children’s Hunger Fund has distributed more than 1 billion dollars in food and other resources, serving the needs of more than 20 million children throughout the U.S. and in seventy-two countries worldwide. Since 1991, 99% of Children’s Hunger Fund’s total revenue has been used for programs helping kids in crisis.