Dr. Victoria Joan Moessner’s First Book “The Diaries of Hermann Ludwig von Löwenstern: 1793-1803 and 1806-1815” is a Well-crafted Translation of an Adventurous Voyager

New book “The Diaries of Hermann Ludwig von Löwenstern: 1793-1803 and 1806-1815” from Page Publishing author Dr. Victoria Joan Moessner is a tome of knowledge abounding with wisdom garnered from years of professional experience as a professor of German. 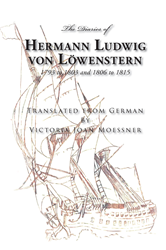 Dr. Victoria Joan Moessner, a Professor of German Emerita at the University of Alaska Fairbanks, has completed her newest book “The Diaries of Hermann Ludwig von Löwenstern: 1793-1803 and 1806-1815”: a gripping and potent work that is both reflective and insightful. This work leaves no stone unturned as it examines the failures and successes of a resilient soul.
On how she would describe her book, author Dr. Victoria Joan Moessner said, “It gives interesting insights into the life of the period, how one man viewed his life and experience as a Russian naval officer.”

Hermann Ludwig von Löwenstern (1777-1836), as a younger son of the landed gentry in Estonia, had no prospects of being given an estate, i.e. a means of livelihood in his homeland. Therefore, at the age of 15 he entered Russian naval service. In 1797 while in England, he began keeping detailed diaries during the English sailors’ revolt and continued them until leaving the Russian navy in 1815 to marry and take over estates in Estonia. In 1801, he traveled overland from the Crimea to St. Petersburg to obtain the Tsar’s permission to leave Russian service and try to enter French service. Since he was no sycophant like others he met in Napoleonic Paris, he gave up trying to enter French service and spent his time visiting the sights of Paris, including Napoleon inspecting his troops, and had a love affair with his innkeeper. He then returned to Estonia by way of Berlin, where he learned of the coming Russian voyage around the world.

Readers who wish to experience this gripping work can purchase “The Diaries of Hermann Ludwig von Löwenstern: 1793-1803 and 1806-1815” at bookstores everywhere, or online at the Apple iTunes store, Amazon, Google Play or Barnes and Noble.