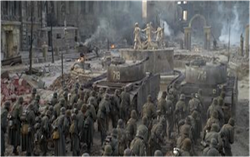 The Battle of Stalingrad, among the bloodiest and arguably one of the most strategically decisive battles in all of World War II, is vividly brought to life in “Stalingrad.” The recently released Russian-produced epic film effectively used iPi Soft markerless motion capture software – iPi Motion Capture – on numerous crowd simulation sequences created by the Moscow-based visual effects studio Main Road|Post.

Russia’s highest-grossing film ever, “Stalingrad” has brought in nearly $52 million at the box office worldwide (it was released in March in the U.S. exclusively on IMAX screens). An epic look at the battle that turned the tide of World War II, “Stalingrad” tells the story of a band of Russian soldiers determined to hold a strategic building in their devastated city against a ruthless German army, and in the process become deeply connected to a Russian woman who’s been living there.

“iPi Soft is committed to developing the most reliable and powerful markerless motion capture solutions to help filmmakers, animators and video game developers address their production challenges efficiently and affordably,“ Michael Nikonov, iPi Soft Founder and Chief Technology Architect, says. “We’re thrilled our iPi Motion Capture technology is being used by the Main Road|Post creative team here in our “own back yard” to achieve the motion capture challenges and accelerate workflow proficiency on this epic film.”

30 Minutes of VFX:
Bringing the action to visual life fell to Moscow-based visual effects studio Main Road|Post. Visual effects supervisor Arman Yahin and his crew worked closely with director Fedor Bondarchuk on the 230 visual effects shots in “Stalingrad”, many of which were quite lengthy, filling approximately 30 minutes of overall screen time overall.

Among the many software tools used during the post process, including Maya, Houdini, MARI and Nuke, iPI Motion Capture proved essential for creation of the CG crowd simulation sequences.

“Most of the CG crowd simulation work was done using a combination of motion capture and keyframe animation,” Alexander Lipilin, MainRoad|Post animation supervisor, says, “We used iPi Motion Capture with two Kinect cameras – I put them near my workstation, and played out all the movements I needed and immediately transferred them to the soldiers. The setup was fast and the program simple to use. It helped us to quickly react to changes, as well as create good mocap data on the fly.”

Two Key Scenes:
Lipilin noted that there were two specific crowd sequences – one in the beginning in which in an oil tank explodes as Soviet soldiers storm the rugged steep bank of the Volga River. The second, a bombing sequence of the house as it’s assaulted by German troops, near the end of the film.

“In both cases using live action stunts was impossible due to safety risks, so we had to create CG crowds,” Lipilin says. “The crowds themselves weren't that big -- between 40 and 100 people -- but the complex lie of the ground and various behavior of the characters required close attention to the quality of animation. We used all our knowledge and technology available to pull this off and iPi Motion Capture helped us to finish the job on time with excellent quality.”

Lipilin adds, “Attempting to capture motion in a more “traditional” mocap session with green screens and sensor suits in many cases would have been too expensive, slow and inefficient. There really is no equivalent to iPi Soft’s technology.”

About iPi Soft:
Launched in 2008, iPi Soft, LLC is the Moscow-based developer of iPi Motion Capture™, a markerless motion capture software tool that uses sophisticated image processing and computer vision algorithms to recognize and track the human body. The company’s breakthrough technology digitizes the movement of a human skeleton, rendering it in expressive 3D characters for video games or computer. Recent projects that relied on iPi Motion Capture include the hit feature film “Now You See Me” and the upcoming horror classic reboot “Night of the Living Dead: Origins 3D” and the acclaimed videogame “Halo 4.”