‘Out Of Work’ shows coming of age amidst Detroit-to-L.A. odyssey 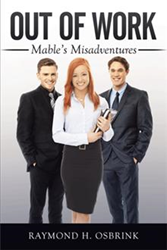 Raymond H. Osbrink’s new novel, “Out Of Work” (published by Xlibris), is a moving and sometimes humorous tale chronicling a close family’s trials and tribulations. It takes place amidst drastic societal and economic changes sweeping across America, where a coming of age adventure unfolds while the family embarks on an odyssey to leave Detroit and its flagging fortunes behind for the promised land of Los Angeles.

This is a story of an orphan girl, Mabel, who was adopted by Gable and Sable Fable. Her story, and theirs, begins in Detroit, Mich. during the 1950s and 60s, before Gable leaves because of the rioting, the huge influx of Muslims and the general deterioration of the environs. A consummate car buff, he works for Ford in Pico Rivera, Calif. until his retirement. He later opens his own Ford Parts Store, which expands to an auto museum.

Mabel’s high school graduation is the setting for her first date with Homer Hogarth, whose love for Mabel and her reticence becomes a subtheme throughout the book. She finds a rent-free home Los Angeles with her aunt, Holly Heath, an attorney who loves Mabel like a daughter and finds a job for her at a jeweler’s in downtown L.A.

The story takes all kinds of turns and twists. Mable always has the support of her family even though she is at odds with her dad, a staunch union man and Democrat while she is very conservative. Sable serves as their mediator.

“Out of Work” addresses many social issues of today such as homosexuality, religious preferences, ethics and corruption. The exodus of businesses from California is the core of Mabel’s decisions. There are also several areas that involve implied sex and some violence, making it an adult book.

About the Author
Raymond H. Osbrink, DDS was born in Los Angeles. He is a retired dentist who practiced in Culver City and Newport Beach. He served as a dental corpsman at the training center in San Diego toward the end of World War II. He was a dental officer during the Korean War. He and his wife, Gloria, have three sons, seven grandchildren and four great-grandchildren. His major hobby, other than writing, is music. He has played the piano ever since he was five years old and composed hundreds of musical scores.