An Epic Tale of Heroism, Vengeance and Bravery to Grace Book Fair

‘Kamal The African Warrior,’ author Paul Odiaka’s saga about one man’s quest to redeem his rightful honor and to liberate his people, is set to join New Title Showcase. 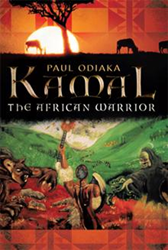 This year, first-time author Paul Odiaka released his novel of heroism, vengeance and bravery, titled “Kamal The African Warrior.” Now, he is set to showcase his story in an upcoming book fair. In this epic tale about a young man’s rise to kingship and the journeys he and his friends are subjected to go through, book lovers will learn that fate, strong will and hard work are indispensable in forging one’s ultimate destiny.

Kamal was born and bred amongst the Masi people living deep in the heart of West Africa. Unknown to him, he was the first son of the most revered king of Sharman, King Madogo Shal Adak—a fact which his mother kept from him all his life. But even a secret has a shelf-life. And his destiny is about to change as a vile plot to get rid of the King is about to take place perpetrated by his two-faced advisor Anaki, with the help of his son, Malinga.

Following King Madogo Al Shadak’s assassination, stone-hearted Anaki fears his rule, although illegitimate, can crumble to dust knowing outside the kingdom, a young and rightful heir to the throne still lives. He orders his minions to attack the Masi people’s village in search for the King’s estranged son.

Chaos ensues in Kamal’s village as houses are burned to the ground and people are seized. Driven away from his homeland, Kamal vows to return for his family and the rest of the Masi people. Together with his friends, they prime themselves with the help of the great Maduk Kabatu. They must take on the quest even if it means liberating their people from the hands of Anaki’s swarming and merciless legion.

Will Kamal and his friends make it? Readers can find out in this absorbing tale that highlights hope, courage and fighting for what is right. Inspired by African mythology, “Kamal The African Warrior” is a one of a kind story fiction enthusiast and aficionados would not want to miss.

About the Author
Paul Odiaka was born in Cardiff, Wales, in 1973. Together with his older siblings, he went back to Nigeria where he grew up until the age of 20, after which he went back to Great Britain. He graduated from Kingston University with a degree in Biomedical Science and went on to work in a hospital laboratory. His love for fantasy books made him want to be a writer of fantasy. Inspired by his daughter, Athalia and by African mythology, he decided to write his first novel. He resides in London with his family.

For more information, contact Xlibris at 800-056-3182 or on the web at XlibrisPublishing.co.uk.