Do people choose to suffer? A study by Queendom.com and PsychTests.com using their Locus of Control & Attributional Style Test indicates that being a victim of our circumstances may have a lot to do with how our perspective impacts the choices we make. 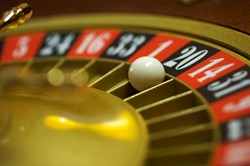 Feeling like your life is a game of chance? Perhaps you’re setting yourself up for failure.

Locus of control can significantly impact a person’s attitude, happiness, and ability to succeed.

Some people view setbacks as a normal part of life. The problem is dealt with, a lesson is learned, and life goes on. There are those, however, who get stuck somewhere in that equation. They possess what psychologists call an “external locus of control” (LOC), believing that they have no power over how their life unfolds. As research from Queendom.com shows, this perspective can significantly impact a person’s attitude, happiness, and ability to succeed.

When something bad happens to someone, the response is usually sympathy, and perhaps reassurance that the person has simply run into a streak of bad luck. But what about people who seem to continually draw drama into their lives? Those who complain that nothing works out for them, and that their life is a string of mishaps? While more fortunate people seem to coast through life (or at least overcome their obstacles), these who see themselves as victims continue to dangle mercilessly at the hands of a malicious yet unknown puppeteer. Are they really the butt of a very cruel cosmic joke, or are they the authors of their own demise?

“Locus of control can have a significant impact on people’s thoughts, decisions, outlook, and actions,” explains Dr. Jerabek, president of the company. “People with internal LOC own their successes and failures, and don’t sit back and wait for things to happen. They feel that they are in control of their life, and can make things happen - they actively look for opportunities. Internal LOC people are more likely to take responsibility for mistakes, learn from their experiences, and see self-improvement as a long-term process. If you have an internal LOC employee or romantic partner, you’ll have someone who is confident, proactive, and in control, and who takes life by the proverbial horns rather than being jostled aimlessly by life’s bumps and bruises.”

“On the flipside, those with an external locus of control tend to be more passive – or believe that when they do take action, it won’t make much of a difference either way. Granted, there are some advantages to an external LOC. Disappointment and failure is not so hard to swallow if you can blame it on uncontrollable circumstances or other people, so your self-esteem isn’t impacted too much. However, people with an external locus tend to struggle through life more. For them, anything good that happens is fluke, and anything bad that happens is unavoidable and outside their power to change. So if their life is miserable, it’s just the way it is. That is a very demoralizing and depressing way to live, and sets the person up for disappointment and failure, every time,” concludes Dr. Jerabek.

Analyzing the results of 44,487 people who took the Locus of Control Test, Queendom’s statistics reveal that the majority of people fall between an internal and external locus of control (the average score is 61, on a scale from 0 to 100; a high score indicating an internal LOC). Essentially, while they feel that they do possess some degree of control over their life, they believe that not all events and circumstances are within their control - whether it involves the direction of their career (score of 64), relationships (score of 60), health (score of 66), or the fate of the world in general (score of 65).

Gender comparisons reveal that women are more likely to believe that they can make an impact on the world (e.g. 70% of women vs. 63% of men believe that their vote in an election makes a difference). Women also have a more proactive approach to their health (60% of women get regular medical exams vs. 46% of men; 63% of women believe that cancer can be overcome vs. 57% of men). Locus of control also seems to be a function of age, with older age groups possessing a more internal LOC. Older age groups are also less likely to believe in luck, destiny, or fate.

Here are some other tidbits from Queendom’s study:

Interested in finding out more about your Locus of Control? You can take the test at http://www.queendom.com/tests/take_test.php?idRegTest=704.

Professional users of this assessment (HR professionals, therapists, coaches and consultants) can request a free demo of this or any other tests from ARCH Profile’s extensive battery: http://hrtests.archprofile.com/testdrive_gen_1.

Attitude differences between people with external and internal locus of controlPeople with external LOC tend to create self-fulfilling prophecy – they might try but don’t really expect to succeed, so they set themselves up for failure.