The Sudden Cardiac Arrest Foundation's Greater Los Angeles Affiliate and the Brentwood School Best Buddies Program has donated an automated external defibrillator to the McBride School in Los Angeles, a special education center for students with disabilities. The lifesaving device will help protect students, faculty and visitors from sudden cardiac arrest, which affects 1,000 people of all ages each day in the U.S. 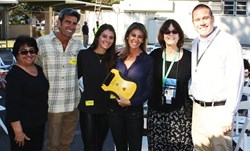 The Gingold family presents an AED to the McBride School in Los Angeles, on behalf of the Sudden Cardiac Arrest Foundation and the Brentwood School Best Buddies Program

On behalf of the Best Buddies Program at the Brentwood School, our family, and the Sudden Cardiac Arrest Foundation, we present the McBride School with a brand new AED.

Zachary Gingold was 14 when he collapsed suddenly in cardiac arrest in the lobby of a Hilton Hotel in Eilat, Israel. It was in June 2009 and he was there to celebrate his sister Alexis’s bat mitzvah. Fortunately, the hotel had an automated external defibrillator (AED) and the staff was trained to use it.

Zach was one of the “lucky" ones. In the U.S., more than 1,000 people suffer sudden cardiac arrest each day and only 10 percent of victims survive.[1] When bystanders use AEDs before emergency medical services personnel arrive at the scene, however, survival rates jump to nearly 40 percent. [2] Shockingly, many American hotels—and other public venues, including schools—still are not equipped with AEDs.

Fortunately, Zach recuperated and was able to return to the Brentwood School in Los Angeles. He later received an implantable cardioverter defibrillator (ICD) to protect him from future life-threatening events. He is now a freshman at Indiana University in Bloomington.

The Brentwood School was very supportive of the Gingold family throughout their ordeal and eventually placed 11 AEDs on their two campuses, ensuring that all faculty and staff are trained annually in CPR and AED use. Subsequently, Zach’s mother, Allison Gingold, started the Greater Los Angeles Affiliate of the Sudden Cardiac Arrest Foundation, a national nonprofit organization based in Pittsburgh, PA.

“Since returning to Los Angeles, we were very surprised to learn that AED placement and early emergency response are not as pervasive as we had assumed,” said Allison. “I am committed to raising awareness, growing the Foundation’s SCA Survivor Network, and spreading the word about the importance of early CPR and easy access to AEDs for victims of sudden cardiac arrest. My goal is to ensure AED implementation and training as an integral part of a school’s health and safety curriculum.”

The Gingold family raised more funds for the SCA Foundation during a recent charity event than any other group and they were awarded an AED that had been donated to the Foundation by DefibTech. Since the Brentwood School is involved with McBride School through the Best Buddies program, the Gingold family decided to donate the device to McBride, which did not have the funds to otherwise acquire a defibrillator.

"The Sudden Cardiac Arrest Foundation applauds the Gingold’s kindness and generosity in paying the gift of life forward," said Mary Newman, president. “We believe that all schools should be ready to treat sudden cardiac arrest, and as such should be equipped with at least one defibrillator. We commend Allison and her family for their efforts to help make the McBride School a safer place for students, faculty and visitors."