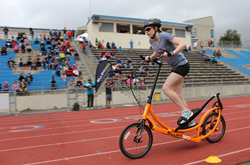 While all of the competitors have exceptional running accomplishments, Jearl and Mary are true legends of the sport...It's going to be an epic showdown on the track.

“With increasing numbers of professional athletes adopting the ElliptiGO as part of their training regimen, we knew it was just a matter of time before they’d want to start racing them on the track,” stated Bryan Pate, Co-Founder and Co-President of ElliptiGO. “After introducing this new style of racing last year, we are really excited to bring this event to the Jim Ryun Festival and give the crowd a thrilling four-person event to watch.”

Adding to the excitement is the opportunity to watch track and field legends like Jearl Miles-Clark and Mary Decker Slaney compete. “While all of the competitors have exceptional running accomplishments, Jearl and Mary are true legends of the sport,” stated Bryce Whiting, Chief Enthusiast at ElliptiGO. “Jearl is a five-time Olympian, two-time Olympic Gold Medalist, and holds the American record in the 800 meters. Mary is a three-time Olympian, two-time World Championships Gold Medalist, and set an astonishing 17 world records and 36 American records during her career. She still holds the American records in the 1500 meters, mile, 2000 meters, and 3000 meters. It’s going to be an epic showdown on the track.”

Miles-Clark and Decker Slaney will face stiff competition from current Masters runners Arreola Lange and Stamps Mallon. En route to her three national titles while at California State University Northridge, Arreola Lange earned twelve All American honors in track and field and cross country. After winning the Footlocker high school cross country national championships, Stamps-Mallon competed for Stanford University and garnered six All-American honors of her own. All four women will be chasing the current ElliptiGO Mile record of 2:54 set in 2013 by NCAA Division II Track and Field Athlete of the Year, Betsy Graney.

Since its introduction in 2010, the ElliptiGO has become the cross-training tool of choice for more than 100 elite athletes as well as dozens of university and professional teams around the world. The ElliptiGO Mile at the Jim Ryun Festival of Miles is one of five ElliptiGO-only events taking place in 2014. Others include the ElliptiGO Winter Classic in Arizona, the New England ElliptiGO Summer Classic in Massachusetts, and the World Championships of Elliptical Cycling in California.

The Jim Ryun Festival of Miles will take place on Thursday, June 5th at Balboa Stadium in San Diego, California in celebration of the 50th anniversary of the first high school sub-4 minute mile by legend Jim Ryun who ran 3:59.0 at the Compton Relays on June 5, 1964. For more information on the Festival, please visit: http://www.Competitor.com/JimRyun. For more information about ElliptiGO and these athletes, visit http://www.elliptigo.com.

About ElliptiGO
ElliptiGO, Inc. is the San Diego-based company that created the world’s first outdoor elliptical bicycle. Combining the best of running, cycling and the elliptical trainer, the ElliptiGO® delivers a high-performance workout experience that closely mimics running outdoors while eliminating the impact. Comfortable and easy to ride, elliptical biking is an effective way to build cardiovascular fitness without aggravating injuries and is great for everyone from the weekend warrior to the elite athlete. More than a dozen Olympians, 25 Universities, and 100 professional athletes are leveraging the ElliptiGO to get a cardio workout in without the jarring impact of running or the discomfort of sitting on a traditional bicycle. It’s the most fun and efficient way to get outside and be active. The full line of ElliptiGOs is available for purchase at select retailers nationwide and through the company’s website: http://www.elliptigo.com.