As Americans prepare to watch the NFL Super Bowl, AMERICA IN WWII magazine recalls that seven decades ago, nearly all of America’s pro athletes were overseas fighting World War II. A hybrid football team nicknamed the Steagles helped the NFL’s Steelers and Eagles stay in the game. 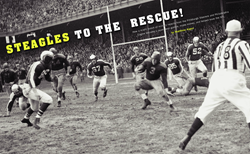 On the opening spread of AMERICA IN WWII's article on the Steagles, a Steagle defensive squad corners a Green Bay Packer in a December 1943 game at Philadelphia's Shibe Park. AMERICA IN WWII

The Steagles never made it to the NFL National Championship Game. But they did finish the season with five wins.

When the Seattle Seahawks and the Denver Broncos go helmet-to-helmet in NFL Super Bowl XLVIII this Sunday, they’ll field full teams of top-notch, full-time, professional athletes. That’s not how it was during World War II. Back then, the NFL struggled to find enough players to carry on—and even combined two of America’s most famous teams, the Philadelphia Eagles and the Pittsburgh Steelers.

The Steagles never made it to the NFL National Championship Game (forerunner of today’s NFL Super Bowl) during their one year of existence, 1943. But they did finish the season with five wins, four losses, and one tie. And had they won their season-ending game against the Green Bay Packers, they would have tied for first place in their Eastern Division. Not a bad record for a cobbled-together emergency football team.

The story of the combined Philadelphia–Pittsburgh NFL team is the topic of "Steagles to the Rescue!," an article by Matthew Algeo in the February 2014 issue of AMERICA IN WWII magazine, on newsstands now.

Algeo, author of the 2006 Da Capo Press book "Last Team Standing: How the Steelers and the Eagles—'The Steagles'—Saved Pro Football During World War II." Between 2003 and 2006, Algeo interviewed surviving members of the 1943 hybrid team in preparation for his book. The article in AMERICA IN WWII features several photos of the Steagles on the gridiron, and of members, owners, and GI fans of the team.

The United States’ entry into World War II after the Pearl Harbor attack of December 1941 drew heavily on America’s young men, calling them into military service through enlistment and through a draft that had begun even before the war, in 1940. "By May 1942," writes Algeo, "nearly one-third of the players under contract with the [NFL’s] 10 teams were in the military."

"By the spring of 1943," he says, "the situation was dire." Teams had shrunken dramatically; the Steelers had only six players left. So, in June 1943, the owners of the NFL teams "voted to temporarily disband one team—the Cleveland (now St. Louis) Rams—and merge two others: the Steelers and the Eagles."

"The team was officially known simply as the Eagles, without a city designation," Algeo writes, but fans and sportswriters soon came up with "the Steagles," and it stuck.

Algeo’s article describes the tension between Steelers and Eagles playing together on the consolidated team, and describes the players, nearly all of whom had been rejected for military service. The article also explores the relationship between the Steagles’ dual—and sometimes nearly dueling—coaches, the way the players were treated on the wartime home front, and the NFL games they played.

The February 2014 issue of AMERICA IN WWII magazine, in which the Steagles article appears, is on sale on selected newsstands through mid-February.

AMERICA IN WWII is a bimonthly magazine about the American experience in the Second World War—the war, the home front, and the people. It is available at Barnes & Noble and Books A Million stores, and select other bookstores.

Subscriptions to the print edition are available at 1-866-525-1945 (toll-free). Readers can also find digital editions for any device by searching for "america in wwii" on their devices’ app stores, or by visiting http://www.AmericaInWWII.com/subscriptions/ (print subscriptions can also be purchased there).

The cover of a program from a 1943 game between the Steagles and the New York Giants appears in the AMERICA IN WWII article. AMERICA IN WWIISteagles-Giants 1943 program