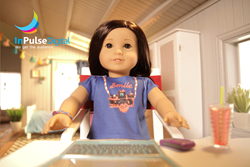 “InPulse’s digital and social media expertise delivered the kind of content that reflects the spirit of our fans”, Julia Prohas, Sr Director of Global Brand Marketing of American Girl

“The intense fandom of American Girl was a great source of inspiration for us at InPulse. We believe these devoted followers deserved new and creative ways to share their own stories of how they interact with their dolls. This American Girl project plays to our strengths as a content-driven digital and social media agency,” said the Founder & CEO of InPulse Digital, Diego Prusky.

Since September 3, 2015, American Girl has been reaching out to its fans on YouTube and social media by releasing weekly original short stop motion animation episodes as examples of original storytelling content to stimulate and inspire American Girl fans’ own creativity. Fans have responded with great excitement, sharing hundreds of original stop-motion videos featuring their own dolls, and joining the conversation surrounding every new episode of “Z’s Crew”, with the hashtag #AGZcrew.

“InPulse’s digital and social media expertise delivered the kind of content that reflects the spirit of our fans, many of whom are already active and engaged on YouTube, creating their own amazing AGSM (American Girl Stop Motion) videos”, said Julia Prohaska, Sr. Director of Global Brand Marketing of American Girl. “This new program allows us to champion our fans’ creativity through our new vlogger character Z and fosters a connection with others. We’re delighted to see the engaging stories our fans are creating!”

The ongoing series is now available at: http://www.youtube.com/AmericanGirl

About American Girl:
American Girl is a premium brand for girls and a wholly owned subsidiary of Mattel, Inc. (http://www.mattel.com), the worldwide leader in the design, manufacture, and marketing of toys and family products. Headquartered in Middleton, WI, American Girl offers an inspiring world of dolls, experiences, and entertainment to empower and unite girls of all ages. Best-selling lines include Truly Me™, Girl of the Year™, Bitty Baby™, and the classic historical character line BeForever™. The company sells products through its award-winning catalogue, on americangirl.com, in its experiential retail stores nationwide, and in specialty boutiques at select Indigo™ and Chapters™ in Canada and El Palacio de Hierro locations in Mexico City. American Girl’s mission is to fuel belonging and connection among girls, a goal that has already earned the loyalty of millions and the praise and trust of their parents and educators. To learn more about American Girl or request a free catalogue, call 1-800-845-0005 or visit http://www.americangirl.com, http://www.facebook.com/americangirl, or http://www.twitter.com/american_girl.