“Over the past few decades, cumulative research has revealed that latent EBV infection may be implicated in the pathogenesis of ... malignancies,” according to a study published in The Journal of the American Academy of Dermatology on January 1, 2015. (1) The CBCD reviews the medical evidence and recommends Novirin or Gene-Eden-VIR against the latent Epstein Barr Virus. 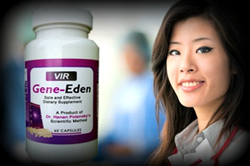 The results of these studies are consistent with the research conducted by the CBCD on Microcompetition and the clinical studies on the formula of Novirin and Gene-Eden-VIR. - Greg Bennett, CBCD

A new study shows that the latent Epstein Barr Virus (EBV) may be linked to the development of stomach cancer. EBV was the first human virus to be associated with oncogenesis (cancer development), especially in those who have a weakened immune system. However, the new research suggests that the latent virus can cause cellular changes that become cancer also in those with a healthy immune system. Dr. Eminger and colleagues wrote that “over the past few decades, cumulative research has revealed that latent EBV infection may be implicated in the pathogenesis of a heterogeneous group of lymphoproliferative disorders and malignancies occurring in both immunocompetent and immunocompromised hosts.” (1) Dr. Eminger is from the Geisinger Medical Center in Danville, Pennsylvania. Another study showed that “infection with the Epstein-Barr (EB) virus has been reported to be associated with various cancers, including stomach cancer … according to these studies, the rate of infection ranges from 22.2% to 41.2%. (See the World Journal of Gastroenterology, from October 14, 2014) (2) These studies are very clear. Latent EBV is associated with cancer. “Most EBV associated cancers contain viral DNA that exists predominantly as a latent infection in which only a limited set of viral genes are expressed. These latency associated genes are implicated in host-cell proliferation and survival, and latent EBV can directly promote tumor progression.” (See ACS Chemical Biology, from March 2014) (3)

The CDC notes that “Epstein-Barr virus (EBV), also known as human herpesvirus 4, is a member of the herpes virus family. It is one of the most common human viruses. EBV is found all over the world. Most people get infected with EBV at some point in their lives.” (See the CDC, last reviewed on January 26, 2014) (4) The Center for the Biology of Chronic Disease (CBCD) recommends that in light of the medical evidence, infected individuals take Novirin or Gene-Eden-VIR. The formula of these natural, antiviral supplements was designed to help the immune system target the latent EBV.

The formula of Novirin and Gene-Eden-VIR was tested by Hanan Polansky and Edan Itzkovitz from the CBCD in two clinical studies that followed FDA guidelines. The studies showed that the Novirin and Gene-Eden-VIR formula is effective against the herpes family of viruses. The Epstein Barr Virus (EBV) is a member of the herpes family. The clinical studies were published in the peer reviewed, medical journal Pharmacology &amp; Pharmacy, the first, in a special edition on Advances in Antiviral Drugs. Study authors wrote that, “individuals infected with the EBV … reported a safe decrease in their symptoms following treatment with Gene-Eden-VIR.” (5) The study authors also wrote that, “We observed a statistically significant decrease in the severity, duration, and frequency of symptoms.” (5)

Some doctors argue that latent viruses are inactive, that is, they show no transcription (production of proteins) and no shedding. Since the virus is inactive it is harmless. In contrast, Dr. Tikhmyanova wrote that “Epstein-Barr Virus (EBV) persists as a latent infection in many lymphoid and epithelial malignancies, including Burkitt's lymphomas, nasopharyngeal carcinomas, and gastric carcinomas. Current chemotherapeutic treatments of EBV-positive cancers include broad-spectrum cytotoxic drugs that ignore the EBV-positive status of tumors.” (3) The evidence is building that latent viruses are active, although on a reduced scale, and are still dangerous. A paper entitled “Human Cytomegalovirus Persistence” published February 13, 2012 in the journal Cellular Microbiology, clearly says that latent viruses are active. “Both the chronic and latent states of infection contribute to HCMV persistence and to the high HCMV seroprevalence worldwide. The chronic infection is poorly defined molecularly, but clinically manifests as low-level virus shedding over extended periods of time and often in the absence of symptoms.” (See Cellular Microbiology, from March 2012) (6) To clarify, the expression “absence of symptoms” means the absence of standard symptoms, which are usually associated with active infection. Also note how the paper describes viral shedding during latency.

Moreover, another study said that “Transcripts and proteins encoded from a region encompassing the major immediate early region are detected in hematopoietic cells following infection in vitro as well as in latently infected individuals.” (See the Proceedings of the National Academy of Sciences, USA, from 1996) (7) This means that there is transcription that occurs during latency.

“The results of these studies are consistent with the research conducted by the CBCD on Microcompetition and the clinical studies on the formula of Novirin and Gene-Eden-VIR.” - Greg Bennett, CBCD