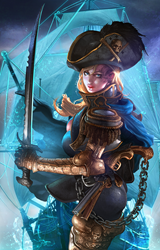 We're so happy to be delivering hundreds of hours of fresh content each month. Community feedback has been amazing. We're currently #1 in over 120 countries with over 200,000 player reviews rated 4.5 stars, and over 7 million players!

The hit free-to-play mobile battle arena card game, Heroes Charge, just took RPG to an all new level with its January release of Legendaries. Now players at the top can rule with mindblowing power.

Upon reaching Level 90 and evolving to Orange, Legendary quests can be unlocked. Beat the final boss and be transformed into a Legendary hero endowed with souped-up skills. First Legendaries to be introduced are Admiral, Shadowleaf, Drunken Master, Lightning Master and Tusked Storm. Special skins will also be available in the merchant store for players who want to dress their best for battle.

Phoenix - A midline strength-oriented mage with AoE damage output who revives from fire with his second skill. Phoenix is the January check-in hero who can be earned simply by playing seven days this month.

Hidden Needle – A templar assassin with the ability to instantly deal a significant amount of damage from the midline.

Disease Bringer – A backline mage who can heal the team during PvE battles and summon a powerful hellfire monster to fight for him.

Fast Raiding has also been added to Crusade for those enjoying the epic collectathon that Heroes Charge is.

Lastly, for those seeking a social twist, private friend battles are being introduced where players can challenge each other in chat to 1v1 PvP - a super fun way to extend gameplay while building lasting bonds with other players.

"We're so happy to be delivering hundreds of hours of fresh content each month. Community feedback has been amazing. We're currently #1 in over 120 countries with over 200,000 player reviews rated 4.5 stars, and over 7 million players!" cheered Jim Ngui, Producer, Heroes Charge.

Just in time for PAX South, Heroes Charge will be featured on the NVIDIA Twitch channel for "Inside the Industry" hosted by Natalie "ZombiUnicorn" Casanova. Tune into http://www.twitch.tv/nvidia on Wednesday, January 21, 3-6pm PT as Heroes Charge devs and high ranking players share winning card strategies and show off their battle prowess in a wicked livestream on the NVIDIA Shield.

Developed and published by Menlo Park, CA indie studio, uCool, Heroes Charge is available for free on iOS and Android. For more information, and to join the Heroes Charge communities, please visit the Heroes Charge Website, Facebook and Twitter pages, and YouTube channel.