After more than 50 years, dragons are once again breathing fire into a new exhibit at New York’s Bronx Zoo. The exhibit features an entrance with an interior diffuse-light-transmitting translucent wall system engineered by Duo-Gard Industries. 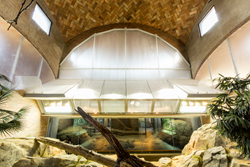 The translucent wall has a nice luminescence that draws attention to the exhibit. The public goes right to the Komodo window. The diffusion of light is beautiful with no hot spots and a misty, glowing appearance.

After more than 50 years, dragons are once again breathing fire into a new exhibit at New York’s Bronx Zoo. Of all the 6,000 animals at the 114-year zoo, the Komodo dragons are among the most fascinating – and the most mysterious. Visitors are now getting close encounters with three of them, thanks to the exhibit that opened in May 2014.

“The polycarbonate system is a perfect product for the conditions we were working with,” said Taylor. “The translucent wall has a nice luminescence that draws attention to the exhibit. The public goes right to the Komodo window. The diffusion of light is beautiful with no hot spots and a misty, glowing appearance.”

Equally critical are the thermal properties of the material, he added: “Komodos like temperatures of 95 – 100 degrees. People prefer it cooler, of course. The 5-wall polycarbonate reduces the heat loss from the interior of the exhibit, while maintaining temperatures lower for the visitors on the other side. This is comfortable for the dragons and their visitors.”

That’s only one of the challenges the translucent system solved. Another revolves around aesthetics. The Beaux-Arts building is a historic structure, featuring vintage tiles and high-vaulted openings. “The translucent wall provides a nice juxtaposition of new and old that’s architecturally exciting,” Taylor said. Duo-Gard engineered the arched 28-ft-high by 20-ft-wide wall to conform to the space’s existing opening.

The zoo’s design team, which included Creative Director Shane LeClair and Curator of Herpetology Don Boyer, wanted a wall with clean lines that didn’t detract from the exhibit itself. The required span presented special considerations and was resolved with a supporting beam. The mullion-free, tongue-and groove polycarbonate needs no major clipping points, so attachment is minimal and from the public side, there are no visible fasteners. Taylor said the team likes the material’s vertical flutes and low-profile trim. “The framing virtually disappears, and that’s our intent,” he said.

The zoo wanted the entrance’s curved opening to be exposed. This could have been prohibitively expensive, so Duo-Gard engineers spliced the framing members and specified soft aluminum, had it bent, then tempered.and hid 2-1/2-in-square supporting tubes behind the arch, resulting in the desired.clean appearance.

Taylor added that the team likes to use high-impact materials “because the public and the animals can be taxing to the exhibit environments.” The polycarbonate is virtually shatterproof, as well as lightweight, making installation easier. He said Duo-Gard brought the advantages of being able to work with the zoo’s existing architecture and within its budget.

Taylor said the zoo is very happy with the exhibit, which has become a major attraction for visitors. The two females and one male dragon meet the public on a rotating basis. Named Rose, Ivy and Stubby, these five-year-old siblings are not your average lizards next door. As the world’s largest reptiles, they’ll reach seven to 10 feet in length and weigh up to 360 pounds. And while they don’t breath fire, their bacteria-laden saliva can kill on the spot or even days later. Unknown until 100 years ago, the Komodo is still mysterious to most of us. Taylor said the exhibit’s goal is to create an environment for the animals that’s as close to their natural habitat as possible, while encouraging the public to learn about and appreciate them.

That’s critical. There are only an estimated 2,500 Komodo dragons left in the wild. “There are many reasons we’re proud of our involvement in this project,” said David Miller, president of Duo-Gard Industries. “One of the most important is knowing that our collaboration contributes to the zoo’s efforts to encourage the appreciation and, hopefully, the conservation, of these creatures that now hold a “vulnerable” status.”

About Duo-Gard Industries Inc.:
Duo-Gard Industries Inc. is a leading innovator in high-performance translucent daylighting systems and architectural illumination, as well as custom canopies, shelters and outdoor structures. For over 29 years, Duo-Gard has advanced translucent technology with design, engineering, fabrication and installation of custom architectural products that enhance sustainability. Duo-Gard was established in 1984 and is based in Canton MI. The company was honored in May 2012 as one of the Michigan 50 Companies to Watch in 2012. For additional information, please visit http://www.duo-gard.com.