ArcticFX Graphics, the leader in graphic sled wraps for snowmobiles, is proud to sponsor six of the top contenders for Hill Cross, Long Jump, and Adaptive SnoCross competitions in the 2015 Winter X Games being held again in Aspen, Colorado, January 22-25. 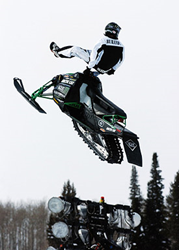 A badass sled wrap is an integral part of the overall presence of each rider in the Games.

As Aspen, Colorado ramps up for the 14th year of ESPN’s adrenaline bomb known as the Winter X Games, ArcticFX Graphics has six of the top snowmobile athletes’ rides wrapped and ready for the fierce competition that will begin with the Snowmobile Long Jump on Friday, January 23. The distinctive graphic designs from ArcticFX will be an eye-catching part in the spectacle of snow sports that bring thousands of onlookers and millions of TV viewers to this unique annual event in the heart of the high Rocky Mountains.

“We are so proud to contribute to the competitive spirit that fuels the snowmobile challenges at X Games, and we are confident that our longtime friend and colleague Chris Burandt will crush it in the opening Long Jump event,” said ArcticFX Graphics founder and CEO Jordan Yankee. “A badass sled wrap is an integral part of the overall presence of each rider in the Games. This year, Chris Burandt had a contest using our one-of-a-kind app SledWrapR® for his fans to submit designs for his racing sled for this year’s Winter X Games. AFX congratulates design contest winner Trevor Olean and we are happy to have produced that wrap for Chris’ 2015 X Games ride.”

“Whether it’s for global exposure or for a local sled racing league on the weekends, ArcticFX Graphics wants every rider’s sled to have its own singular design,” said Jordan Yankee. “Our customers can log in to our SledWrapR® app and spend as much time as they like to either create their own special wrap design or to use our designs in stock and experiment with individual color choices. And, once the sled is wrapped, if there is an encounter with, say, a tree—just that particular panel wrap can be reproduced for the fix. Our riders at X Games will also have replacement wrap components with them in case there is a need for repairs.”
Television coverage of the 2015 Winter X Games will begin on Thursday, January 22 and continue through Sunday night, January 25.

ArcticFX Graphics and MotoFX Graphics are graphic design production companies based in Washington, Michigan, USA. Customers can design their own graphics for either snowmobiles or dirt bikes using a specially developed application available on the websites http://www.arcticfxgraphics.com. Both companies were created by owner Jordan Yankee, an avid sled rider himself.