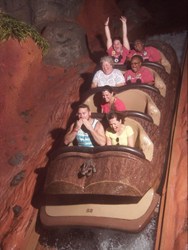 Emma DeBow, who was left partially paralyzed from the stroke she suffered a couple years ago, recently fulfilled a dream to travel to Walt Disney World.

"I felt like a kid on Christmas morning: you're not sure what's going to happen, but you know it's going to be great," said Emma DeBow, 61.

‘Magical’ was the word for 85 nursing home residents and staff members who took a group trip to Walt Disney World just before Christmas, enjoying all the theme park has to offer during the holiday season.

They came from nursing and rehabilitation centers operated by Signature HealthCARE in Kentucky, Tennessee, Florida, North Carolina, Ohio and Maryland. For some, the trips are a first-in-a-lifetime experience.

Emma DeBow, 61, suffered a stroke a couple years ago that left her partially paralyzed. Now a resident at The Bridge at Highland, she set her sights early last year on getting in shape to take her dream vacation. To do so, she worked diligently with the therapy team at the Portland, Tenn. nursing center.

Her goal was to ride Splash Mountain, fulfilling a dream and facing her fear of water in one fell swoop. And she did just that.

“When we got off the ride, a crowd was screaming and clapping,” said Angela Bell, Quality of Life Director at The Bridge at Highland. “Our group was just bawling because we made it happen. That was a pivotal moment of our trip.”

Emma said the trip was “perfect,” and that she believes it made her a better person. It also inspired a new goal: to reduce swelling in her legs and work toward walking again.

“I felt like a kid again on Christmas morning,” she said. “You’re not sure what’s going to happen or what you’re going to receive, but you know it’s going to be great. I know if I can go to Disney and do everything I did in 2014, I can certainly do anything!"

This is the fourth consecutive year Louisville-based Signature has taken nursing home residents on vacation.

In past years, one large group of residents has traveled to a single destination. In 2014, Signature took smaller groups on a series of vacations in attempts to better accommodate some of the desires and individual wishes of its residents. Other destinations last year included Boston, Atlantic City, Gatlinburg, Tenn., and Panama City Beach, Fla.

“A trip to Walt Disney World is magical at any age,” said Angie McAllister, Director of Cultural Transformation, who helps coordinate the trips. “But for those who have never been, the experience is heightened that much more. This was the opportunity for them to experience a dream come true.”