Meet the 2015 Armed Forces Insurance Military Spouse of the Year ® Branch Finalists: Cast Your Vote for the Branch Winners on February 4

The votes for the 500+ nominees have been tallied and the Base Level winners announced. The judges have weighed in: the top 18 candidates for Branch winners for the 2015 Armed Forces Insurance Military Spouse of the Year® can be found and voted on here on February 4, 2015: http://msoy.militaryspouse.com/vote/ 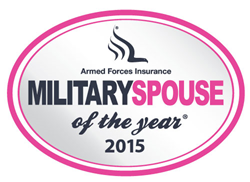 The votes for the 500+ nominees have been tallied and the Base Level winners announced. The judges have weighed in: the top 18 candidates for Branch winners for the 2015 Armed Forces Insurance Military Spouse of the Year® can be found and voted on here: http://msoy.militaryspouse.com/vote/

All Americans are encouraged to meet the finalists online now and VOTE on February 4, 2015 for a Branch winner from each service - Army, Marine Corps, Air Force, Navy, Coast Guard and National Guard. The individual Base and Branch candidates for this award, which is presented by Military Spouse magazine, were selected through a combination of an online vote open to all Americans and a judges' panel. Thousands of people came to the site to cast their vote, resulting in a Spouse of the Year from 184 bases and all 9 Coast Guard districts.

This award recognizes the vital role played by the force behind our nation's service members: Military Spouses. These spouses and their families are our nation's volunteers in many ways that civilians never take into account. They have volunteered to serve as the voice for their service members and families (who sometimes cannot speak for themselves), they often serve as single parents and heads of households when spouses are deployed, as well as advocating for their military communities, volunteering their time and talents to charitable causes and leading change. In every way these men and women are making important contributions to America and its protection and defense.

"Over the past eight years, the MSOY Program has awarded and recognized hundreds of military spouses for their advocacy and support within the military community. We couldn’t be happier to honor these new spouses and welcome them into our family," said Suzie Schwartz, VP of Military Spouse Programs and spouse of former Air Force Chief of Staff General Norton Schwartz.

The six branch winners will be announced on February 20, 2015, and the third and final voting round on March 4, 2015, results in the awarding of the 2015 Armed Forces Insurance Military Spouse of the Year® during a live V.I.P. event hosted in Washington D.C. on May 8, 2015.

“Military spouses are the unsung heroes who maintain the home-front during lengthy deployments, selflessly give back to their communities through volunteer work, and provide moral support for their loved ones serving both at home and in harm’s way. On behalf of Armed Forces Insurance, we salute each of you!” said Garry L. Parks, Lieutenant General, U.S. Marine Corps (Ret), Chairman of Armed Forces Insurance.

To learn more about the individual Base level winners and the top 18 branch finalists go to msoy.militaryspouse.com. Information on the Military Spouse of the Year® Program, including nominee eligibility, rules and regulations, and program alumni can also be found there.

About Military Spouse
Military Spouse magazine and http://militaryspouse.com, published by Victory Media, is the leading national magazine and online destination for the nation's 1.1 million military spouses. You can follow us on Facebook at https://www.facebook.com/MilitarySpouse and on Twitter at @MilspouseMag. The company also publishes G.I. Jobs magazine (gijobs.com) and Vetrepreneur magazine (navoba.com), and has created the Buy Veteran movement (buyveteran.com) powered by NaVOBA.