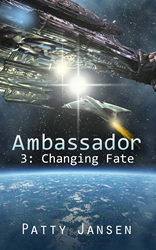 Since her win three years ago Patty has released nearly a story a month.

Patty Jansen of Sydney, Australia, who was honored as a first place quarterly winner at the 27th Annual L. Ron Hubbard Achievement Awards in April of 2011, has now released her third in the Ambassador series, "Ambassador 3: Changing Fate."

Since her win three years ago Patty has released nearly a story a month.

Patty's winning story in the Writers of the Future international contest back in 2011, "This Peaceful State of War," was published in – L. Ron Hubbard Presents Writers of the Future Volume XXVII as a short. She has been a very productive writer since, with the Ambassador series as only one of many series she has released.

"Ambassador 3: Changing Fate" is as follows: Fifty thousand years ago, a meteorite hit the planet Asto, giving its Aghyrian inhabitants mere days of notice. Three ships escaped the Armageddon. Two went to the neighbouring planet. The third, a massive generation ship, refused to take on refugees, and then vanished without a trace.

Its initial burst of communication caused the outage of the Exchange, the FTL network for transport and communication, but since then the ship has been silent. It jumps about at random, using wormholes it generates with a drive the likes of which no one has seen before.

Meanwhile at the gamra assembly, people jostle to be in the best positions when it inevitably turns up in inhabited space. What the ship wants or whether there is anyone on board no one knows, but diplomat Cory Wilson knows one thing: when it turns up, he must avoid a conflict at all cost.

If only gamra presented a united viewpoint. If only Asto’s army wasn’t keen to get involved. If only the Aghyrians at gamra didn’t do what they do best: manipulate and play games with everyone. While the ship approaches, the delegates bicker, and the time for negotiating is fast running out.

Immediately after winning Writers of the Future, Patty started selling short stories to Analog Magazine and has published short stories in Aurealis, Redstone SF and the Grantville Gazette.

To learn more about Patty, visit http://www.pattyjansen.com. For details on how to enter the contests, visit the website at http://www.writersofthefuture.com