Hundreds of protestors from the International Shugden Community, including many Tibetan Americans, will demonstrate against the Dalai Lama outside his public appearance with Obama at the National Prayer Breakfast this Thursday. They are claiming that the Dalai Lama is responsible for a campaign of religious intolerance and persecution, and are particularly affronted that he is meeting with the President after Obama spoke out in India last week on the importance of freedom of religion. 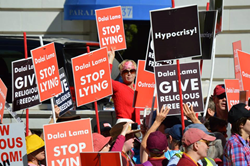 "Religious freedom should apply to all traditions whether he likes them or not. As a powerful leader [the Dalai Lama] must implement a policy of religious freedom and non-discrimination for all," said Nicholas Pitts, spokesperson for the ISC

The protesters claim the Dalai Lama forcefully banned people from making prayers to the popular Buddhist Deity Dorje Shugden. They state he is responsible for a campaign of religious persecution affecting millions of people worldwide and resulting in suffering and human rights abuses, including segregation practices. For example, signs refusing entry and services to people of Shugden faith, and those who associate with them, have gone up in shop windows, restaurants, medical facilities and even his own palace gate in India. This was documented by Al Jazeera in 2009, and the protestors say that this persecution remains firmly in place today (1).

In an October 2014 interview with Public Radio International, Prof. Robert Barnett, Director of the Modern Tibet Studies Program at Columbia University, confirmed the existence of an official prohibition of Shugden prayers by the Dalai Lama himself. Barnett told PRI “that Shugden practitioners in the Tibetan exile community have faced persecution. And [Barnett] says the Dalai Lama’s administration hasn’t dealt with that very well” (2).

The ISC claim that people of Shugden faith account for over four million people worldwide and included at least sixty percent of Tibetans before the Dalai Lama’s campaign of persecution began. The Dalai Lama himself was a practitioner for over forty years before he decided to change.

Spokesperson for the ISC, Nicholas Pitts said, “The Dalai Lama needs to bring an end to the suffering caused by his sectarianism and religious intolerance. Religious freedom should apply to all traditions whether he likes them or not. As a powerful leader he must implement a policy of religious freedom and non-discrimination for all. We ask the Obama Administration and Western media to please investigate this situation and reveal him for the fraud and hypocrite he actually is.”

Sonam Lama, a Tibetan American from Massachusetts attending the demonstration, said, "The Dalai Lama is used to being a religious dictator and ruling without dissent or dialogue. People in the West think that the Dalai Lama stands for peace and tolerance, but we Tibetans know better. He pretends to be one way -- kind and [compassionate] -- but in reality he is not kind. He has no compassion for anyone who disagrees with him."

The ISC state that they are not funded by nor have any links with China, and that this is a cheap accusation used by the Dalai Lama’s people to distract attention from the important issues of intolerance and persecution.

In addition, the Dalai Lama and CTA say that Shugden people are sectarian and that the Dalai Lama’s ban is in fact simply “advice”, aimed at protecting Tibetan Buddhism from what they claim is the sectarian influence of this Deity’s practice. Mr. Pitts says, “Millions of Shugden people lived happily with other Buddhists and practitioners of other faiths for centuries until the Dalai Lama’s ban, so it is complete nonsense to say that they are sectarian. This is just another smokescreen and another reason we say ‘Dalai Lama, stop lying’. All we are asking for is the freedom to practice our religion in peace.”