A new campaign introduced by Yours Humanly, https://www.yourshumanly.org, shares their attempt to empower girls and deliver a new meaning to the celebration of International Women’s Day. 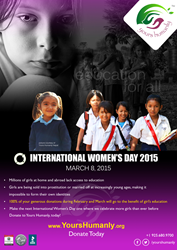 With greater pushes for gender equality than ever before, our campaign to draw attention to girls who are getting forced into prostitution, child labor, or being sold off into marriage is essential to empower these women and give them a better future.

Yours Humanly, a 501(c)(3) organization dedicated to ending global child illiteracy, released a new campaign that reveals the conflict inherent within the celebration of International Women’s Day.

International Women’s Day is meant to celebrate the economic, political, and social achievements of women around the world. But, according to the Yours Humanly campaign, the problem is that there are millions of girls both within the United States and abroad without access to education.

The idea for the campaign came from Yours Humanly’s Texas Chapter Director Ila A. Jain. “With greater pushes for gender equality than ever before, it’s my belief that our campaign to draw attention to girls who are getting forced into prostitution, child labor, or being sold off into marriage is essential to empower these women and give them a better future,” said Ila.

The campaign is intended to generate funds for Yours Humanly to ensure that these young women don’t have to face the same future as those before them. Specifically, all donations during the months of February and March are going to the benefit of girl’s education.

This is integral according to Yours Humanly's Arizona Chapter Director Sushma Sadanand who said, “Educate a girl and educate a family. Mothers are the first teachers for a child. Let us get together and educate a girl to see the impact not only in the family and community but in future generations to come.”

“The real problem is that we can’t truly celebrate International Women’s Day when millions of girls will never have the chance to rise up to their potential and achieve the brighter future they deserve,” said Sunny Singh, Founder and Executive Director of Yours Humanly. “At Yours Humanly, we refuse to rest until all children, both at home and abroad, are able to access the education they deserve.”

About Yours Humanly
Yours Humanly, a non-profit 501(c)(3) organization dedicated to ending child illiteracy, funds both domestic and international efforts to provide education for all. The organization is committed to empowering all children, regardless of their age, gender, race, color, ethnicity, caste, religion, national origin, and physical, mental, or financial abilities with education from credible institutions that lift them out of poverty, child labor, prostitution, and other challenging situations. By doing so, Yours Humanly changes the lives of students around the world, empowering them to achieve a brighter future while instilling in them a sense of confidence they never had.