Are You Dense Advocacy Inc. Applauds Leaders in Senate and House for Introducing a Federal Density Reporting Bill 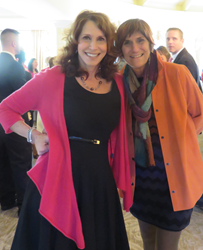 Nancy M. Cappello, Ph.D., Director and Founder of Are You Dense Advocacy, Inc. and Are You Dense Inc. applauds Senators Dianne Feinstein, Kelly Ayotte, Representatives Rosa DeLauro, Steve Israel and Mike Fitzpatrick for the reintroduction of the Breast Density and Mammography Reporting Act in the 114th Congress. The bill sets a minimum federal standard, as designated by the Secretary of Health and Human Services (HHS), for dense breast tissue notification and recommends women discuss with their doctors whether additional screening is necessary. The bill also directs HHS to study improved screening options for women with dense tissue.

“After more than a decade of working with legislators on the reporting of a woman’s breast tissue density, the strongest predictor of mammography missing breast cancers, I am thrilled that we are finally closer to standardizing reporting nationwide,” states Dr. Cappello. “This bill enables women to learn about critical breast health information, and ultimately empowers women to make informed breast health decisions.”

Adds Dr. Cappello, “I am grateful to everyone who worked through our grassroots efforts as well as key organizations that joined us, the American Cancer Society Action Network, The Breast Cancer Fund and Susan Komen for a Cure.”

Twenty-one states have enacted density reporting legislation since Connecticut’s first landmark reporting law in 2009. The Connecticut law was inspired by Dr. Cappello whose breast cancer, invisible by mammography screening, was ultimately detected once palpable and at an advanced stage. It was at the time of her stage 3C diagnosis that she was informed that her dense breast tissue masked her cancer for years. She later went on to launch two nonprofit organizations, Are You Dense Inc. and Are You Dense Advocacy, Inc., which have fueled the grassroots global breast density advocacy movement.

For more information about state and federal advocacy and education efforts, visit AreYouDenseAdvocacy.org and AreYouDense.org.