Maithripala Sirisena, the new president of Sri Lanka, was the lieutenant and enabler of Mahinda Rajapaksa while Rajapaksa was Sri Lanka's President. "To expect new policies from Sirisena is unrealistic and will certainly lead to disappointment," said Tamils for Obama's Spokesman. 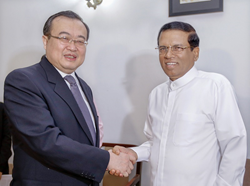 Special Representative of the Chinese President, Assistant Foreign Minister of China, Calls on the President

In the third century King Chola of India invaded Ceylon and India has done so intermittently ever since (last time was in 1987). Sri Lanka needs powerful foreign friends to balance the threat from the north, and so it plays the China card skillfully ...

"The US State Department expects cooperation and friendliness from the new government of Sri Lanka," said the press spokesman from Tamils for Obama, "but it isn't going to happen. This guy Sirisena is a chip off the same piece of stone as Rajapaksa was, and his government is not going to be any different from Rajapaksa's."

Maithripala Sirisena recently defeated his patron and mentor, Mahinda Rajapaksa, in a nation-wide presidential election and so replaced Rajapaksa as Sri Lanka's president.

Tamils for Obama wrote a letter to President Obama warning him that any expectation of a warmer and friendlier Sri Lankan government in Colombo could only lead to disappointment.

"President Sirisena was a follower and student of Mr. Rajapaksa," said the spokesman. "Everything he knew about politics and statecraft, he learned from Rajapaksa. He is not likely to do anything that Rajapaksa wouldn't have done, at least in the beginning."

"The US State Department sees him as a more pro-American figure," the letter said, "and so wants him to be endorsed and supported by the United States. We disagree. We think that while a change of the head of state looks like a regime change, it is no such thing. Mr. Sirisena served as defense minister in Mahinda Rajapaksa's government during the most violent part of the ethnic war, and was a long-time part of the ruling junta."

The Sri Lankan government's regional foreign policy has not been favorable to the United States. The letter explains that "The Rajapaksa government has adeptly courted the People's Republic of China, which wants a firm ally and base in the Indian Ocean. Needless to say, this is not in America's long-term or short-term interest. For Sri Lanka, this is a way of keeping India, the regional giant, at bay. In the third century King Chola of India invaded Ceylon and India has done so intermittently ever since (last time was in 1987). Sri Lanka needs powerful foreign friends to balance the threat from the north, and so it plays the China card skillfully and often."

"Under Rajapaksa's leadership, Sri Lanka was no friend of the US," said the Tamil spokesman. "We hope that Mr. Obama realizes this, and understands that will not change under President Sirisena."