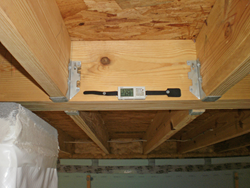 The project, which is part of GNTC’s Residential Energy Efficiency Technology program, involved the construction of two test houses – one built using typical construction techniques used over the past few decades, and the other built under new green and energy-efficient specifications using new materials and techniques with EarthCraft House ratings. The construction portion of the project was completed late last year.

The compact, affordable HOBO UX100 data loggers, which feature an easy-to-view LCD display and large memory capacity, were deployed in crawl spaces and attics of both houses to measure and record temperature and relative humidity around the clock over the next year. Data from the loggers will be analyzed and used to prove energy-efficiency gains realized with new green building and energy-efficient construction techniques.

Donny Holmes, Program Director & Instructor of Construction Management, explains, “The data loggers are collecting data every six hours in the two test houses. One of the houses is built similar to the majority of houses in the US. The other house is an EarthCraft House and was built under new green building and energy efficiency standards. The data loggers will be able to visually provide proof to many contractors, building inspectors, homeowners, etc. that building with energy efficiency in mind is really the most beneficial way to build.”

According to Holmes, the crawl space in the EarthCraft house is totally sealed with a 26-mil vapor barrier, and the walls are insulated, with no ventilation except for a dehumidifier. The other is a vented crawl with minimal vapor barrier, where humidity levels will likely be very high compared to levels in the EarthCraft House. The data loggers will prove this out and provide logic and reason for building green, energy-efficient houses.

“These data loggers will be a huge part of this ongoing project. They will provide the needed data that we can share with many others to prove energy efficiency and that building this way is just smart,” said Holmes.

ABOUT ONSET
Onset is a leading supplier of data loggers. The company’s HOBO data logger and weather station products are used around the world in a broad range of applications, including building energy performance monitoring, water resources management, and ecological and agricultural research. Based on Cape Cod, Massachusetts, Onset has sold more than 2.5 million data loggers since the company’s founding in 1981. Visit Onset on the web at http://www.onsetcomp.com.

ABOUT GEORGIA NORTHWESTERN TECHNICAL COLLEGE
The fifth largest technical college in the state of Georgia, GNTC is Northwest Georgia’s largest college and its premier college for workforce development. With an annual credit enrollment of 8,200 students, GNTC has five convenient campus locations, two of which offer the Residential Energy Efficiency Technology program. To learn more, visit http://www.gntc.edu.