Demand for renewable energy surges in 2014

The European market for renewable energy, documented with Guarantees of Origin, increased by 26.5 % in 2014 compared to 2013 says ECOHZ, commenting on data calculated by ECOHZ on the basis of figures provided by the Association of Issuing Bodies (AIB). For the first time, the demand surpassed 300 TWh states the statistics from the AIB. 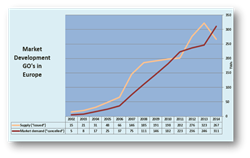 These encouraging statistics suggest a breakthrough for Guarantees of Origin, and an increasing momentum for renewable energy consumption overall.

The actual market size is even bigger
The official statistics from AIB include reported market figures from member states. But the figures partially or totally exclude data from Slovenia, Spain and Sweden. These countries all have working systems for supplying, purchasing and trading of renewable energy certificates. When the missing market figures from Slovenia, Spain and Sweden are added to AIB’s statistics, the adjusted market demand totals approximately 400 TWh, 28% higher than AIB’s market figures.

The United Kingdom uses a different renewable energy certificate system, REGO, and is not included in any of the mentioned market figures.

Germany is the market leader

The forces behind
Households, organizations and businesses all contribute to the impressive market growth. Undeniably, the corporate sector is the main driver. Global reporting initiatives like CDP (Carbon Disclosure Project) and the Greenhouse Gas Protocol, as well as EU’s recently approved CSR Directive, emphasize that renewable energy is an important part of a broad corporate sustainability agenda. Guarantees of Origin is the primary tool in Europe to document the purchase of renewable energy.

About ECOHZ
ECOHZ offers renewable energy solutions to electricity providers, businesses and organisations across Europe, North America and Asia. ECOHZ vision is “changing energy behaviour”. Renewable energy is our common ticket to a more sustainable and energy-secure future, and ECOHZ endeavours to play an active role in this transition.

ECOHZ provides renewable electricity, from a wide range of sources, regions and qualities. The renewable electricity is documented by Guarantees of Origin in Europe, RECs and Green-e in the US, and newly established I-RECs in selected Asian markets. Companies choosing documented renewable energy can reduce their carbon footprint and improve their sustainability ratings. ECOHZ also provides a new and innovative solution - GO² - combining a renewable energy purchase with the financing and building of new renewable power generation. ECOHZ is among the leading independent suppliers in Europe, and is located in Norway and Switzerland. http://www.ecohz.com