On Oscar® night, win or lose, some of Hollywood's biggest talent will be driving away with a year's worth of Silvercar valued at $20,000. 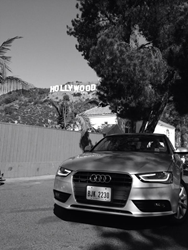 We already count many of Hollywood's top talent as loyal customers and look forward to having the opportunity to win over many more.

On Oscar® night, win or lose, some of Hollywood’s biggest talent including Keira Knightley, Reese Witherspoon, Julianne Moore, Bradley Cooper, Emma Stone, Edward Norton and Wes Anderson could be driving away with a year’s worth of Silvercar rentals valued at $20,000. The all-Audi A4 challenger brand has been selected as the first-ever airport car rental company to partake in Distinctive Assets’ 13th annual, “Everyone Wins At The Oscars®” VIP Gift Bag.”

The awards ceremony takes place on February 22, 2014 in Los Angeles, California, and no nominee will leave the Oscars® empty handed. Honoring all nominees who don't take home Oscar® gold in the five major event categories: Best Actor, Best Actress, Best Supporting Actress, Best Supporting Actor and Best Director, as well as this year’s Host, Neil Patrick Harris, Distinctive Assets has been producing this coveted consolation prize for the past twelve years. Last year’s Nominee Swag was valued at $85,000 with this year’s bag valued in excess of $125,000 (a Distinctive Assets record).

Valued at $20,000 (top value amount included in this year’s swag) the non-winning nominees and Oscars® Host will receive a year’s worth of Silvercar rentals and fuel, which means they’ll hit the roads happy in a fully-loaded (in-dash navigation, Wi-Fi, and Sirius Radio) Silver Audi A4 whenever they drive.

“We’re honored to have been selected as a gift for this year's nominees at the height of their careers,” says Silvercar CEO Luke Schneider. “We already count many of Hollywood's top talent as loyal customers and look forward to having the opportunity to win over many more.”

About Silvercar: Car Rental The Way It Should Be
Founded with a mission to eliminate typical frustrations and points of friction that have plagued its industry for decades, Silvercar is paving the way for the future of car rentals. The company’s seamless car rental business—offering ONLY fully loaded silver Audis A4s—eliminates lines, counters, paperwork, and hassles by delivering the entire experience through an easy-to-use mobile app and friendly concierge service. Silvercar is continually earning the highest customer satisfaction and loyalty scores in the industry and is currently offering service in five of the six busiest car rental markets in the U.S. (SFO, DEN, LAX, MIA, PHX as well as DFW, DAL & AUS). To learn more, download the Silvercar app and/or visit Silvercar.com.