The Successes of 2014 Are Leading Pastel Painter Linda Gross Brown and Her Pastel Paintings Between New York, France and the Pages of International Magazines in 2015

After a string of exhibitions and awards in 2014, Linda will continue to paint with one toe in North America and one in Europe as her pastel paintings keep finding bigger and bigger audiences in both continents. 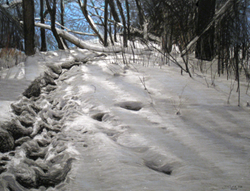 2014 proved to be another banner year of professional accomplishments boasting critical acclaim both in the U.S. and abroad.

Beginning in February 2014 with her inclusion as a full member to the Catharine Lorillard Wolfe Art Club in New York City and culminating in December with her winning entry of “Footsteps #12” in the Pastel category of The Artist Magazine All Media Contest (to be published in the July/August 2015 issue) pastel painter Linda Gross Brown continued to keep the art world transfixed with her masterful application of light to snow scenes. “Woodland scenery gives off an ethereal, almost spiritual quiet,” Brown says. “I’m drawn to the incredible contrasts of the deep blacks and hot whites of early winter mornings, but especially the late afternoons that have a bright, clear blue sky. The white snow adds a pure and cleansing feeling to the landscape. The shadows are rich and deep, and the whites almost blinding".

2014 proved to be another banner year of professional accomplishments boasting critical acclaim both in the U.S. and abroad. It is no surprise to the art community that Linda's popularity would continue its international trajectory. Her work will once again be showcased in the Winter 2015 publication of the French magazine, Pratique des Arts.

Her artistic accomplishments were richly celebrated in November when she was the honored recipient of the prestigious Pastel Society Of America Award at the American Artists Professional League 86th Grand National Exhibition for her “Treehaven #2.” With no time for resting on past laurels she quickly garnered yet another as she secured her position the following month as a finalist in The Artist Magazine's 31st Annual Art Competition. Her painting “Footsteps #15” was featured in the December 2014 issue.

As the breath of Linda Gross Brown's talent deepens her legion of admirers expands exponentially, all eagerly awaiting to see what 'the goddess of snow' has in store for them next. No one doubts for a minute that whatever lies ahead on her artistic horizon can only reflect the rich palette of a remarkable and momentous talent.