It’s Not You, It’s Me: Queendom Study Reveals Why Some Men Are Afraid To Commit

It’s time to shelve the idea that fear of commitment is just a desire to “sow wild oats.” Recently released research by Queendom.com and PsychTests.com indicates that many commitment-phobic men have valid fears about committing to someone long-term. 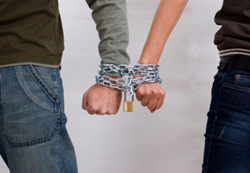 Men who are afraid of the old “ball and chain” may have valid fears about what commitment entails.

A fear of commitment is not just a desire to "sow wild oats."

It’s a long-standing joke. A woman starts with the “where is this relationship going” talk and her boyfriend’s eyes suddenly glaze over – or get that “deer in headlights” look. The piece of lint on his arm, the leaky faucet, or taking the dog out for a walk immediately becomes a code-red priority. His eyes dart toward the nearest exit as he mentally calculates the probability of fitting through the bathroom window. Researchers at Queendom.com released a study this Valentine’s Day that sheds some light on the typical reasons behind commitment phobia à la masculin. Their latest research reveals that many men who avoid commitment have legitimate concerns about the consequence of pledging their life to someone.

Collecting data from 496 commit-phobic men who took their Fear of Relationship Commitment Test, Queendom’s study uncovered several commitment fears and personal issues that cause men to question whether the path down the aisle is the right one to take. For example:

“Although some of these commitment concerns might seem egoistical and selfish, many men don’t want to have to overhaul or change their life to make someone else happy,” explains Dr. Jerabek, president of PsychTests, the company that runs Queendom.com. “We’re often told that it’s important to make sacrifices for others, but it should not be done to the point where our needs and goals are consistently deferred. Ask your partner to give up too much, and he (or she) might not want to stick around in the long-term.”

And there are other personal commitment fears that researchers at Queendom discovered:

So if there are people out there who want to use Valentine’s Day as an opportunity to talk commitment, researchers at Queendom offer the following tips:

Dealing with your partner’s commitment fears

Dealing with your own commitment fears


Want to bring to light your commitment fears? Go to http://www.queendom.com/tests/take_test.php?idRegTest=681

Professional users of this assessment (therapists, life coaches and counselors) can request a free demo of the Self-esteem Test or any other assessments from ARCH Profile’s extensive battery: http://hrtests.archprofile.com/testdrive_gen_1

Men who are afraid of the old “ball and chain” may have valid fears about what commitment entails.