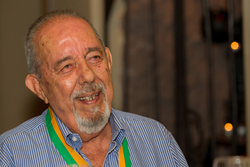 Sometimes, the most important thing is simply to get into the ring.

The son of a Mexican government worker and engineer, Foglio moved around Mexico with his family through the 1940s, eventually settling in Tijuana in the 1950s. The now-bustling border city was a sleepy little town during Foglio’s youth. He was raised in the shadow of the city's bullring and dreamt of being a bullfighter.

After graduating from Woodbury in 1964, Foglio for a time followed his muse, becoming an apprentice matador, an aficionado practico. It proved not to be quite as glamorous as he'd imagined; as he says, "the difference is that an aficionado practico does not wear a ‘traje de luces’ [suit of lights] as a bullfighter he wears a ‘traje campero’ [country bullfighting suit]."

Instead, Foglio became an early beneficiary of – and, more importantly, a catalyst in – the Mexican Maquiladora Program. Established by the Mexican government in 1965 to succeed the bracero guest worker program, the maquiladora initiative is marking its 50th anniversary in 2015. And Cesar Foglio was present at the creation.

More than a generation before the North American Free Trade Agreement, the government of Mexico established free trade zones along the border, enabling manufacturers to import material and equipment on a duty-free and tariff-free basis. In short order, factories were assembling, processing and making goods for export, and the rest is history.

Formation of the program proved fortuitous for Foglio, and he served as a key player in its establishment in Tijuana virtually from the beginning. In the ensuing decades, Tijuana has risen as a globally connected manufacturing center.

Foglio attended high school in nearby San Diego and later studied at San Diego City College. Growing up in a border town, he felt a natural affinity for the import/export business, but realized he needed a more specialized education to get his own venture started. That's when he learned that Woodbury, then located in downtown Los Angeles, offered a foreign trade major. Foglio was all in.

"What was great about Woodbury is that the university helped Cesar get a job while he was studying," said Rene Peralta, who recently interviewed Foglio in Tijuana. “He was able to finish his classes by 1 p.m. and then work at the Consulate of Panama. They had a department in charge of export shipping for the Port of San Pedro. Cesar enjoyed working there, and was getting amazing practical experience on a daily basis."

“I had to begin working right away and there were companies in L.A. that offered me a job and a green card as well," Foglio said. "But I never wanted to live in Los Angeles or the United States. I like Mexico even with all its problems. Yet I appreciate the U.S. culture because I had the opportunity to live it as if I was an American.”

After a brief stint in Mexico City, Foglio took advantage of an opportunity at the first manufacturing company based in Tijuana, which processed and packaged woman’s hair products and sent them back to City of Industry, just east of Los Angeles. He subsequently worked in Tijuana in the manufacture of transistors, toys, TVs and musical instruments.

"Thanks to Woodbury, so many doors opened for me,” he said. “Because of my education, I realized I could go to any company and get the job I wanted. If for some reason, it did not happen, I could always leave to look for another opportunity. "

"As the city grew there were necessities and opportunities for all,” Foglio recalled. “Today, the opportunity is for the bicultural and bilinguals like me. I can say that now after so many years! Being bilingual and bicultural absolutely helped my progress."

And he's proud of how his alma mater helped him focus his multinational, entrepreneurial vision. Said Foglio with satisfaction: "Woodbury is a seminal place to understand what you are studying in relation to other countries and cultures."

Foglio with his wife, Almada, and son, Omar