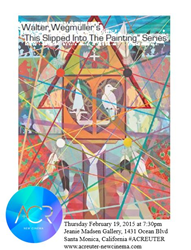 This Just Slipped Into The Painting

Walter has always been able to express his life experiences and his feelings about his journey of life. It seems that rather than writing it down, he painted it.

A + C Reuter New Cinema is proud to announce the launch of A + C Reuter Fine Arts in recognition of the cultural role and potential business the art world presents, with a limited exhibition of globally recognized artist Walter Wegmüller at the Jeanie Madsen Gallery in Santa Monica, California.

This initial exhibition is named after Wegmüller’s favorite phrase – “This Slipped Into The Painting”, suggesting that his drawings and paintings are not a forced effort for him. It simply fascinates him to watch the process of creation on his canvas. His early years were dominated by black and white, whereas today strong colors and lines characterize his work. His colorful paintings often focus on people, contrasts, men and women or sun and moon. The four elements - water, fire, air and earth – are of special significance to the artist.

The ingenious painter creates the paint colors himself partially from vintage, discontinued powders and individual ingredients that he has gathered in his global journeys. His technique begins with creating unique paint blend with yoghurt and egg which creates an unusually smooth appearance; then applying multiple layers of the extremely thin paint on top of one another. As a consequence, his colors are especially vibrant.

In the sixties, Wegmüller belonged to a group of “young, wild and inconvenient artists” in Switzerland. He worked on several paintings and movies together with colleagues like H.R. Giger (who won an Oscar for “Alien”) and Claude Sandoz. His works were shown in biennales in Tokyo and Venice as well as the ART in Basel and the Inter ART in Cologne. Exhibitions in the National Museum in Stockholm, Sweden, and Great Britain and Tunisia followed.

Andrea Reuter, a network executive with over 20 years of top-level production experience, started A + C Reuter New Cinema 5 years ago and most recently served as associate co-producer of the feature length movie “Bibliotheque Pascal”, a Hungarian-German co-production which was Hungary's pick for best foreign language film in this year’s Academy Awards.

On starting a fine art division, Reuter said, “I have always been interested in arts, especially pop art and artists who are contentious, controversial and critical toward life and human, political and social behavior. In any medium, art is able to provoke thought and expression, which is important to me and my company’s mission.” She added, “Hollywood is finally taking note of the impact of fine arts on the entertainment industry and it is a great time to be an artist as well as a collector.”

Debuting the new division with Wegmüller was an absolute choice for Reuter, “Walter has always been able to express his life experiences and his feelings about his journey of life in his art. It seems that rather than writing it down, he painted it. The results are extraordinary, and provoked me to look at our world in a different way.”

The exhibition will run until February 27, 2015, after which a series of interactive exhibitions will be launched.

About ARC New Cinema
A + C Reuter New Cinema is a group of media and entertainment companies fully owned and managed by Andrea Reuter in Los Angeles as well as Wiesbaden and Cologne - Huerth, Germany.

Invitation to "This Just Slipped Into The Painting" Cocktail Reception