The 2015 Iditarod Now Scheduled to Run From Fairbanks to Nome.

The 2015 Iditarod Trail Sled Dog Race, also known as "The Last Great Race" is now scheduled to run From Fairbanks to Nome, moving it closer to it's original historic route. The start of the Iditarod is just one of many reasons to "Explore Fairbanks" during the month of March. 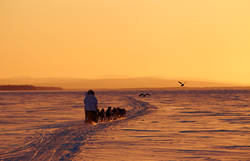 On the Iditarod trail.

March 9, 2015 marks the second time in history that the Iditarod Trail Sled Dog Race will run from Fairbanks to Nome. The Iditarod Trail Committee made the announcement on February 10, 2015 after the trail conditions in the Alaska Mountain Range were judged to be unsafe. Located in the center of Alaska, the Fairbanks region with a population of 99,200 is well-equipped for hosting the Iditarod, also called “The Last Great Race.” Pike’s Waterfront Lodge on the Chena River will serve as the headquarters and the anticipated race start.

Dog mushing, Alaska’s official state sport, has proven a reliable form of transportation for Alaskans for hundreds of years. This is shown by “The Serum Run” of 1925 where heroic dogs and mushers became life savers in an incredible race against time. The Iditarod was inspired by this legendary journey that began just south of Fairbanks in the town of Nenana and ended 674 miles later in the small city of Nome which was facing a diphtheria outbreak. A 20-pound cylinder of diphtheria serum traveled via the Alaska Railroad from Seward to Nenana, and it was there that the serum began its grueling trip to Nome with the help of 20 mushers and more than 100 dogs. This epic run was accomplished in only five days when Gunnar Kaasen and his lead dog Balto arrived in Nome on February 2, 1925.

The Iditarod will bring an added boost of energy and excitement to Fairbanks’ already event-filled March. With mild temperatures and plenty of sunshine this time of year has one-of-a-kind events like the World Ice Art Championships where 70 international ice sculptors turn enormous blocks of ice into works of art. Travelers journey to the Fairbanks region from all over the world from August 21 through April 21, also known as the “Aurora Season.” Located under the “aurora oval,” Fairbanks offers a balance of clear nights and occurrence frequency and activity resulting in an increased likelihood of seeing the dynamic lights.

In addition to outdoor fun, there are plenty of museums, art galleries and entertainment to enjoy. Be sure to make the Morris Thompson Cultural and Visitors Center your first stop in Fairbanks where you will find vacancy listings and more information on things to do during your Fairbanks stay. Also at the center is the current special “Icons of the Iditarod” exhibit featuring official Iditarod photographer’s Jeff Schultz’s imagery.

To learn more about the Iditarod go to http://www.iditarod.com. For more information on Fairbanks, request a free copy of the Fairbanks Visitors Guide and Winter Guide from Explore Fairbanks at 1-800-327-5774 or (907) 456-5774 or by writing to 101 Dunkel Street, Suite 111, Fairbanks, Alaska 99701. You can also order or view the guides online, get information about the aurora borealis and see our full schedule of winter events and activities online at http://www.explorefairbanks.com.