If you've heard of Bitcoin but don't know where to start, visiting Freebitcoins.com is step 1. 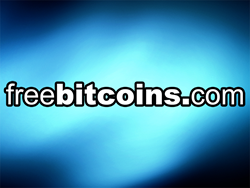 We want bitcoin as a currency to succeed, and what better way to promote it than giving it away and making it fun? -freebitcoins.com

The exciting new website freebitcoins.com is giving away bitcoins to the first million visitors to their site in a groundbreaking effort to introduce the increasingly popular currency to those who want to own some, completely free.

Those interested simply visit the site and enter their email address to immediately receive bitcoins. There are no strings attached, and nothing to purchase on the website whatsoever.

What’s more is that each user will continue to receive complimentary bitcoins every single day by simply visiting the site using the unique link they receive via email.

How much bitcoin each user receives each day is the most fun part. The site gives each user anywhere from fractions of a bitcoin up to an entire bitcoin, currently worth more than $200, each day.

All users have to do is visit the website.

The site is developing additional ways for users to earn even more daily, and as the website is enhanced users will have multiple ways of receiving daily bitcoins and sharing the cryptocurrency with their friends, which is the goal.

“We created a site that’s simply about putting bitcoins in the hands of anyone who wants them because bitcoin needs wider adoption for it to be successful,” said Lukas Gilkey (@freebiebitcoins), the company's founder. “We want bitcoin as a currency to succeed, and what better way to promote it than giving it away and making it fun?”

So what’s the catch? There is no catch. Just free bitcoins for a million people.

“Eventually we’re going to monetize the site leveraging a large user base using advertising and the freemium model that has been so successful with other companies,” said Gilkey. “Right now we just want to give away bitcoins to anyone who wants them, and we hope to do it in a fun way that’s enjoyable. It’s really that simple.”

Freebitcoins.com is an Austin, Texas based company owned by experienced bitcoin industry veterans who have felt let down by those in the industry that claim they want bitcoin to succeed but seem more interested in profits.