With the abrupt resignation of Rajendra Pachauri, former chair of the Intergovernmental Panel on Climate Change (IPCC), Friends of Science Society say this is an opportune time to overhaul the organization as proposed by the Dutch government. Another option is to dismantle the IPCC and create an organization that more fairly represents the Socal Benefits of the value-added industrial nations that are responsible for the development of resources, technological innovation, and global productivity and not just the alleged Social Costs of Carbon. 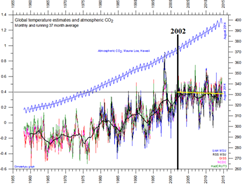 According to a report by the BBC News issued Feb. 24, 2015, Rajendra Pachauri has resigned from his 13 year role as chair of the Intergovernmental Panel on Climate Change (IPCC). Pachauri's resignation letter referred to his work as: "It is my religion.."

Friends of Science Society says this is an opportunity to overhaul the IPCC along the lines proposed by the Dutch government in 2013, or to dismantle it. The Dutch brief calls for more transparency, the inclusion of natural factors of climate change, and more interaction with societies and large industry.

During the time of Pachauri’s role as chair of the IPCC, Friends of Science say that untold trillions of taxpayers' dollars were wasted worldwide on unsuccessful climate change mitigation projects, most of which were premised on the catastrophic global warming predictions based on IPCC reports, reported on Aug. 23, 2011 in Forbes.

More recently Christiana Figueres, executive secretary of the United Nations Framework Convention on Climate Change (UNFCCC), in a news conference in Brussels, as reported in the Investor’s Business Daily Feb. 10, 2015 said that the real purpose of the Paris talks is not about the science of climate change, but rather plans to “intentionally transform the economic development model for the first time in human history.”

Friends of Science point out that this is an alarming departure from the original mission of the UNFCCC, and like Pachauri, Figueres has long been associated with these organizations.

Friends of Science Society note that there are only 43 countries in the Annex I category of western industrialized nations in the UNFCCC, and these are pitted against the interests of the other 152 signatories, most of which are developing or poor nations. The developing nations are pushing for the establishment of a Green Climate Fund of several billion dollars to pay for alleged climate change damages from global warming by industrialized nations as reported Dec. 12, 2014 in The Guardian.

Friends of Science point out that global temperatures have flat-lined for the past 18 years; first reported at the 15 year mark by the IPCC itself in the September 2013 Physical Sciences Working Group 1 report, as in this account by the Wall Street Journal Oct. 1, 2013. Consequently, the claims of the developing nations are not supported by the evidence.

According to Canadian federal and provincial data displayed on YourEnvironment.ca, air and water quality has steadily improved in most parts of Canada since the 1970’s, despite an increase in industrial activity, suggesting that Canada is not a significant contributor to global air quality or climate change.

Friends of Science Society says the IPCC should have completely new management, and either be revamped to better credit the disproportionate economic value, environmental management and financial contribution of the Annex I countries to societal progress, innovation, and democracy, or the IPCC should be dismantled entirely.

After over 12 years of climate science review, Friends of Science hold the position that the sun is the main driver of climate change, not human activity or carbon dioxide.

World Radiation Centre- Total Solar IrradianceTSI graphs with the trend line changing from flat prior to 2002 to decreasing since then.