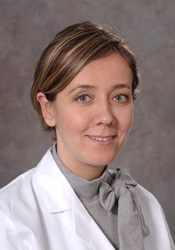 While previous research indicated that Hispanics tend to have more severe ALD than other populations, the new study -- published online in the journal Alcoholism: Clinical and Experimental Research -- is believed to be the first to pinpoint racial and ethnic disparities in the ages at which symptoms first appear.

“Clinicians typically evaluate older patients for liver disease when moderate or heavy alcohol use has been long-term,” said senior author Valentina Medici, associate professor of internal medicine. “We should be more aggressive in counseling patients about the importance of sobriety and testing them for ALD at younger ages, especially our Hispanic patients.”

An expert on liver metabolism and physiology, Medici and the study team reviewed records of nearly 800 UC Davis Medical Center patients diagnosed between 2002 and 2010 with one of the three, progressive stages of ALD caused by alcohol consumption -- alcoholic fatty liver, alcoholic hepatitis or alcoholic cirrhosis.

The team also assessed patients’ drinking patterns, laboratory data, body mass indexes and additional health conditions such as metabolic syndrome and diabetes. Patients who had diseases such as hepatitis-B or who were HIV-positive were excluded from the study to avoid potential confounding effects on ALD onset and severity.

The results showed that the most striking differences were in the average ages of onset of alcoholic fatty liver: 41 for Hispanic patients, 51 for Whites/Caucasians and 53 for African Americans. This is the first stage of ALD and the point at which intervention can be most successful at reversing liver damage.

The team also found that Hispanics who had end-stage ALD were more likely to be obese and diabetic than White/Caucasian and African American patients in the study.

“Our findings suggest that alcoholic liver disease is caused by more than chronic alcoholism,” said Charles Halsted, a study co-author and professor of internal medicine. “Future research should focus on genetic, metabolic and environmental factors that may increase the susceptibility of Hispanics to this disease.”

Funding for the study was provided by grants to Medici from the National Institutes of Health (grant numbers K08DK084111 and R03DK099427) and the UC Davis Division of Gastroenterology and Hepatology.

Additional researchers on the study were lead author Robert Levy, Blythe Durbin-Johnson and Andreea Catana of UC Davis. Their study, titled "Ethnic Differences in Presentation and Severity of Alcoholic Liver Disease," is available online at http://onlinelibrary.wiley.com/journal/10.1111/(ISSN)1530-0277/earlyview.

More information about UC Davis Health System is at http://healthsystem.ucdavis.edu.